Day After Over-Indulgences = Exercise and Shopping

By Heather Iacobacci-Miller December 26, 2009
So I feel like a total slug after the past two days of over-eating and, yes, over-drinking. I got up this morning and had no desire to cook anything. Breakfast was Kashi Island Vanilla. After breakfast, I made my way to the mall. It was totally over hyped (I hyped it up myself of course). I found a few things at The Limited, but other than that, wasted gas. I was not to be deterred, so I made my way to Barnes & Noble to pick up the January issue of Oxygen Magazine. Then it was on to Michael's Crafts to find holiday decorations for next year. My kitchen is a deep blue with toile accents. So next year I believe the color scheme will be silver and blue (Jason actually requested this; he's a decorator at heart). So I scouted out some blue and silver bulbs, blue lights, and hurricane vases with silver bottoms. Can't wait to put it all together next year. In fact, it was all I could do not to pull it all out to give it a test run!

After Michael's, I thought I might strike gold at Ann Taylor Loft and/or White House Black Market. Nope, nada. That was my cue to take my rear to the gym and stop procrastinating.

Today I ran for 25 minutes then did my leg workout (that's been put off far too long). I also did abs and stretched. It was good "me" time.

Lunch was scrambled egg whites with sauteed red and green bell peppers, onions, and left over Gimme Lean "Sausage" patties in a whole wheat wrap. No pictures, I was far too hungry to even think about taking the time to take photos.

Hi, my name is Heather, and I am a shopaholic. So after refueling, I headed back out. Yes, sad. I had two gift cards to Bed, Bath, & Beyond that were screaming to be used. I ended up buying a new hand-mixer - Cuisinart 7-speed Chrome-Plated. The one I have is about 7 years old (at least). My sister bought it the first year we started having our "Cookie Day." When I was making dough this year, I thought the poor thing was going to burst into flames or start smoking at the very least. It is definitely on it's last leg. Now I suppose I need to find a recipe that requires the use of a hand-mixer.

I needed a post-shopping snack, so I made some Pumpkin Hummus (thank you my blog friend enablers for the suggestion). I wasn't sure if I should flavor towards the sweet or savory, so I went savory. I blended 1 can of chickpeas (rinsed/drained), 1/2 can pumpkin puree, unknown amount of fat-free plain yogurt, sea salt, pepper, cinnamon, cumin, red pepper, lemon juice, and tiny drizzle of olive oil. Turned out quite nicely actually. Again, no pictures. I think I may be "pictured" out (temporarily).

Ok, so I have been doing the majority of the cooking over the past few days. Jason was kind enough to take over the cooking duties for this evening (with the exception of an impromptu dessert). We had picked up some butternut squash ravioli from Whole Foods on Thursday. We've both been liking the flavors of the squash combined with black beans. So he wanted to do a black bean sauce, but I thought that would be too heavy. We also had some crimini mushrooms that needed to be used, so I suggested a mushroom sauce. He decided to try both. I don't know all of the ingredients so I won't even pretend to post as a recipe for anyone to replicate. But the mushroom sauce consisted of criminis, onion, spinach, and vegetable broth. The black bean sauce consisted of black beans (obviously), skim milk, and spices (not a clue what he used as I sat back and let him cook for once). We started with a salad of leaf lettuce, mandarin oranges, walnuts, feta, and a balsamic vinaigrette. Then the main dish(es) with a side of toasted homemade ciabatta bread. 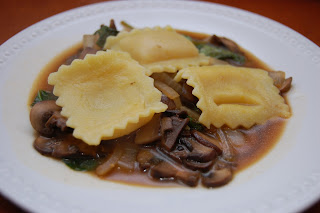 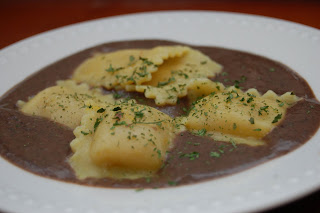 I always have a major sweet tooth after I eat dinner. I have been trying to find healthier desserts to satisfy said sweet tooth. Lucky for me, in the issue of Oxygen Magazine that I picked up today, they had a recipe for "Sweet Tofu Yogurt." Sorry, they don't have it posted or I would link to it. But basically it's tofu, fruit, lemon juice, vanilla extract pureed. I added cinnamon and honey as well,. Jason agreed with me that it's more of a pudding consistency. If you are one that likes a bit of a crunch in your dishes, you may want to add toasted nuts or granola. But, it was a very tasty treat. 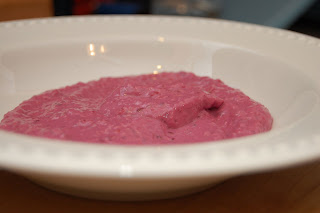