By Heather Iacobacci-Miller December 17, 2009
Well, my shoulders and biceps are sore from my gym workout yesterday. Guess I pushed myself harder than I had thought. My quads were a little sore from spin, but they loosened up over the course of the morning. I was still debating about whether or not I was going to take my leg workout to the gym or just do it at home (or take a rest day). Well, we have a fancy schmancy party to attend tomorrow night, so Jason had to get his hair cut at lunch (of course he put it off until the last minute). But, I took the opportunity to go home and do my leg workout before I talked myself out of it entirely.

I did the weighted leg exercises from Pyramid Lower Body, but I did not rely on the DVD even though I was home. I honestly felt like I was able to better concentrate on the moves since I wasn't focusing my attention on Cathe. I brought a mirror into the room - it's a spare room that was just cleared out for my weights. I feel like I was able to really work on my form as well. I am definitely going to have to invest in a large mirror for that new "gym" room.

With my workout done for the day, I more free time to cook dinner. I cook most nights, hubby cooks the other nights. What I mean is that I had time to try something new that I have been putting off because I knew it'd require more than 30 minutes.

This idea came from the fact that I love to stuff poblano peppers coupled with my recent obsession with butternut squash. I found that I really like the combination of butternut squash and black beans and thought the two would make a perfect filling for poblano peppers. Well, even though I had a little extra time to spend cooking, a single sweet potato cooks up much faster and works just as well with black beans. So I took the easier road on this one for Sweet Potato and Black Bean Stuffed Poblano Peppers. Rather than cooking something like Spanish rice for the side, I like to make pearled barley in the same dish with the poblanos. I think the flavors from the peppers seep into the barley. So, this isn't an exact science recipe, and you may have to tweak it with a little more or less water or spices, etc. But this is the basic idea I started with and use. And yes, I tweak my own recipes as I go. Sorry.

Prepare the peppers and sweet potatoes first:
Prepare your poblano peppers by removing the end with stem. Discard stem, but save the pepper to dice up and add to filling. Make a slit down the length of the peppers and remove ribs and seeds. Place in small casserole dish and cover. 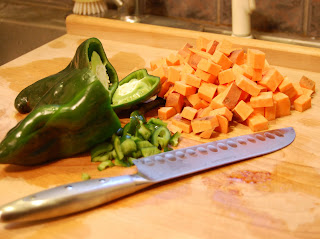 Put peppers and squash in oven and bake for approximately 20 minutes. The peppers should be ever so slightly tender but not soft, the potatoes may need to cook longer until they are tender.

In medium saucepan, cook barley according to package directions. I used 1/2 cup dried pearl barley with 1 1/4 cup water. You can add seasonings and/or broth.

In skillet, saute onion, diced poblano from cap, and garlic until soft. Add in the beans, potatoes, chipotle pepper, spices, and cream cheese and let heat through (approximately 3-5 minutes). 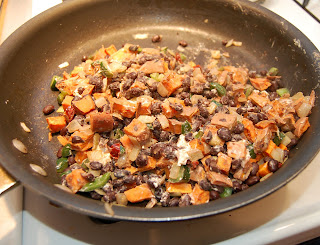 Spray the casserole dish used to pre-bake the peppers. Add in pearled barley, diced tomatoes with liquid (I ended up needing to add about 1/4 cup extra water so barley did not dry out). Add in garlic powder, cumin, salt, pepper, chili powder to taste. Stir together.

Stuff poblanos with mixture and return to casserole dish. Top with shredded cheese if desired and bake covered for approximately 15 minutes, then uncover and bake until cheese is melted. 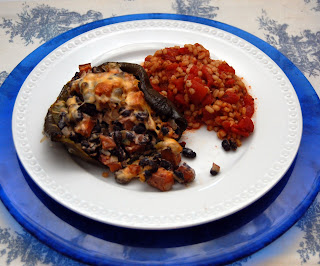