By Heather Iacobacci-Miller December 25, 2009
After brunch I was thinking I may never want to eat again. Stuffed! I had to put on my Christmas PJs the minute my mom and sister walked out the door. If you can recall the Friends episode where Joey wore maternity pants for Thanksgiving and called them his Thanksgiving Pants, well that's how I was feeling about the PJs. I'll definitely be hitting the gym hard tomorrow!

Of course the stuffed-to-the-gills feeling finally passed...after many hours of course. It was time to figure out exactly what to do for our special Christmas Dinner. I had originally wanted to do a cranberry chipotle sauce/gravy for the Quorn Turk'y Roast. However, Jason ate the cranberries in his cottage cheese yesterday as a snack. Oops. So I had to go to a Plan B. This is why we always keep a very well-stocked pantry!

I had originally planned to start with salad of spinach, leaf lettuce, mandarine oranges, and toasted walnuts with a balsamic vinaigrette. We were still entirely too full for a starter. So directly to dinner.

I made the Quorn Turk'y Roast and the sauce ended up being a fig sauce. I sauteed finely diced yellow onions and garlic, then added diced dried figs, and simmered in a Pinot Noir and vegetable stock. I let it reduce for about 30 minutes.

The side dishes included the Kale with Currants, Lemon and Olives recipe I found in Food and Wine magazine. I didn't have currants so I substituted with white raisins instead. I also used low-sodium vegetable broth instead of the chicken stock. Oh, and I pretty much halved the recipe. I also made roasted new potatoes with thyme, sea salt, black pepper, and rosemary and homemade French bread rolls. 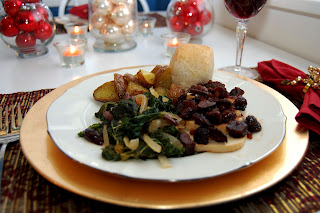