By Heather Iacobacci-Miller January 09, 2010
This morning was a busy one. I had several dishes to get prepped for my sisters party, plus squeeze in my workout. Today I did a premix from Step Blast (about 40 minutes), then the last of the Total Body Training workouts for week 1, which was two sets at 15 reps of each exercise:

After my workout, Jason and I had lunch together. I heated up a can of Progresso Creamy Tomato Basil soup and made a salad with fresh spinach, red leaf lettuce, chickpeas, roasted red bell peppers, sundried tomatoes, artichoke hearts and balsamic vinaigrette. 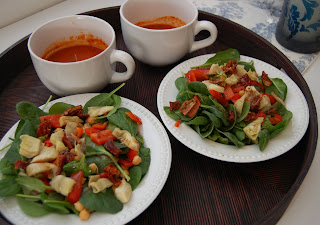 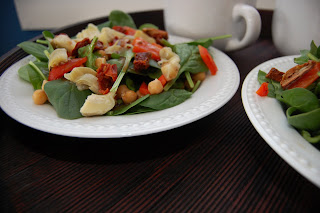 Then it was time to get serious about food prepping. I had already made the ciabatta bread so that was easy enough. The butternut squash & black bean chili had been previously made and frozen. Last night Jason helped me make the corn bread (see Fat Free Vegan's recipe. The only alteration is omitting the corn and adding chipotle chili flakes). For the spinach & artichoke dip, I decided to seek out a new, healthier recipe. I found one called "Yummy Vegan Spinach Artichoke Dip" at Recipezaar.com. Of course I made some changes, but just a few:

Blend together tofu, nutritional yeast, garlic, vinegar, and spices in blender until mixed and smooth.

Combine all ingredients (add extra seasonings as needed). Poor into baking dish and bake for 15-20 minutes until lightly browned on top.

I will be heating this up at my sister's, so pictures and results will be posted tomorrow. I did have a taste of the sauce, and I think it's really going to be tasty.