Gettin' Over Hump Day with Workout and Lasagna

This morning Jason got up at 5 am to go to a master's swim class. I thought I was going to fall back asleep, but was wide awake at 5:15. I decided to embrace that rarity and get my cardio done. I opted for HiiT Pyramid because there's no equipment involved for set up. It's really only about 25 minutes so I repeated it for a total of 43 minutes. This is a fun workout, and it was a good workout for me this morning. Much better than yesterday. After, I stretched and even started prepping for dinner tonight. I felt so accomplished by 6:30!

I did hit the gym for weights. Warmed up for 10 minutes on the treadmill, then did 4 sets of 8 reps of each exercise as supersets increasing 1.25-2% from last week.

Lesson learned: Oh, Monday I forgot my weight gloves. I won't do that again. So today was far less torturous. Do you wear weight gloves?

Yoga? I have decided that I really need to add in a yoga workout to my routine. I used to dance (ballet) and was always super flexible. Ballet was like my meditation time. It just doesn't fit into my schedule anymore sadly. I would love to get some suggestions on yoga DVDs. What are your favorite yoga DVDs?

Dinner tonight was Eggplant spinach Lasagna with Cashew Ricotta. I absolutely love Japanese eggplant and greedily snatched some up when Jason and I went to the Asian market last weekend. They are great for substituting noodles in lasagna. Jason loves them breaded and crisped up (they make awesome snacks just like that). He would have thrown a small fit had I not breaded them. So I did, but tried to make it a little healthier by omitting the egg wash and only using a small amount of breadcrumbs.I also used a Cashew Ricotta recipe I found from Choosing Raw for the filling. I've been wanting to try a vegan ricotta, so I thought I could just test it out at least once.

Luckily I had time to make the cashew ricotta yesterday, and this morning I was able to get the eggplant baked. So, all I had to do was assemble everything after I got home from the gym.

Spaghetti sauce (your favorite, I used a homemade)

Cashew ricotta (recipe below, next time I will use 1 1/2 of the recipe)

If breading the eggplant: spray with a non-stick spray and lightly sprinkle with Italian Seasoned breadcrumbs. Bake for 30 minutes at 375 degrees, flipping once.

In casserole dish, spread thin layer of spaghetti sauce across bottom. Add single layer of eggplant strips, top with sauce, ricotta, spinach, cheese and repeat ending with cheese (if using). In not using cheese, I would suggest adding the ricotta as the last layer.

Cover and place in oven and bake for approximately 15 minutes. Remove cover and bake another 30 minutes or until bubbly.

Juice of one lemon

water (see notes below, may try with soy, rice, almond milk instead)

Throw nuts in a food processor and process till ground well. Add salt, lemon juice, miso if using. Scrape sides of bowl and run processor again, this time drizzling some water in. Keep doing this until the cheese reaches the consistency you like. Add tomatoes and basil and pulse until they are well combined into the cheese.

I served this the lasagna with a side of sauteed green beans, red bell peppers, and onions and toasted homemade ciabatta bread. 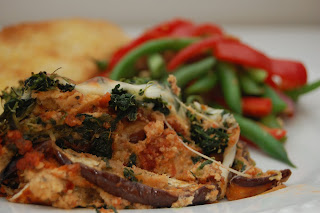 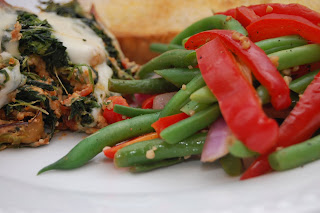 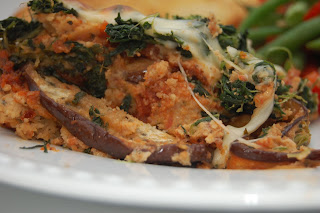 Conclusion? The cashew ricotta was interesting. I have seen other recipes that use tofu instead or in addition to the nuts. I may give those a try just for comparison's sake. The tofu may make for a slightly creamier "ricotta." I think another option would be to use soy, rice, or almond milk rather than water to loosen it up rather than the water. However, after baking, ricotta tends to have a drier texture anyway. This was very tasty in this lasagna. I loved the tartness from the sundried tomatoes Jason went back for seconds!