My Name is Heather, and I am a Recipe Junkie

By Heather Iacobacci-Miller January 07, 2010
It was another cold day here. Started off at 32 degrees and then dropped off from there. It was a rest day for me. I needed to run a few errands for my sister's birthday party on Saturday.

Dinner needed to be something warm and cozy (and fast) again. So that brings me to a confession: I am a Food Network junky (a recipe junky in general truth be told). I don't care what is on (other than the food competitions, which I'm totally sick of), I'll watch it. Giada De Laurentiis is probably my favorite chef. Maybe because she's Italian. Some of her recipes sound so fantastic, even if they tend to be far from "clean" or vegetarian. I have, however, taken many of her recipes and made them vegetarian, as well as healthier when possible. One of my favorites is her "Sausage, Peppers, and Onions Sandwich." While her recipe is for a sandwich, I prefer to use it over a whole-wheat penne or spaghetti squash. So, that was dinner tonight as I had some leftover spaghetti squash to use. The basic sauce part is a really good base for other veggies as well. Here is my version of the recipe (please visit the site to see the original recipe as you may want to follow that or modify that one instead).

"Sausage,"Peppers and Onions with Spaghetti Squash

1 (15-ounce) can no-salt diced tomatoes (optional, I often do not use them)

Whole-wheat pasta (I like penne or rotini) cooked per package directions or baked spaghetti squash, shredded 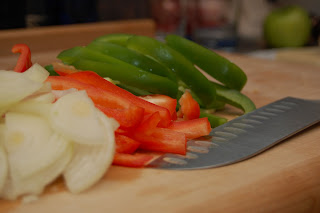 Heat a non-stick skillet and brown the "sausages." Set aside. 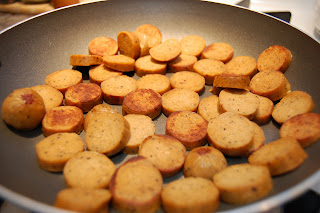 In a large skillet, add olive oil, onions, peppers, salt and pepper. Cook on low until the onions begin to soften. Add the garlic, wine, tomatoes and remaining spices. Simmer on low until sauce begins to reduce, approximately 10 minutes. Add tomato paste to thicken (if it gets too thick, add more wine) and the "sausages". You may need to re-season after adding tomatoes and paste. Continue to simmer until sauce comes together and flavors meld, approximately 10 minutes. 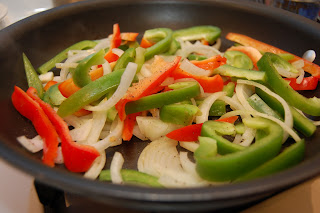 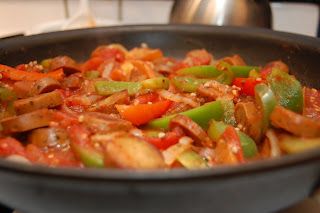 Serve over pasta or spaghetti squash and top with nutritional yeast flakes or grated parmesan cheese. You may also serve as a sandwich per Giada's recipe. I would suggest that if you do this, you slice the "sausages" in half rather than in rounds. 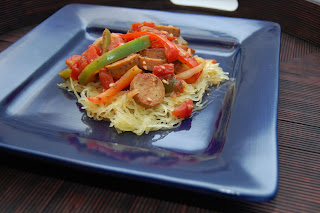 Caviat: Now, my version is vegetarian/vegan, but I will admit it's not the cleanest because of the meat substitute. I am trying to use these products less the more I read, but sometimes you just want something comforting. And to me, this is a comfort dish. The problem with some of the meat substitutes is that they are often high in sodium, but on the other hand, high in protein. For serious clean eaters, you may try this dish using a hearty bean, perhaps red beans?

After dinner I was able to relax on the couch with my pile of new cookbooks. I got three in yesterday and one more today. I'm in heaven! So many new recipes and cooking methods that I really don't know where to begin. As I get more into these cookbooks, I'll be sure to post about them. If you have them, I'd love to hear your thoughts and perhaps your favorite recipes so far. 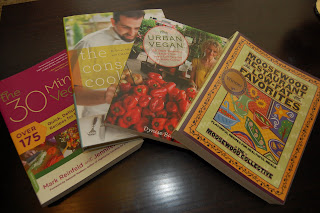 The Conscious Cook: Delicious Meatless Recipes That Will Change the Way You Eat

The 30-Minute Vegan: Over 175 Quick, Delicious, and Healthy Recipes for Everyday Cooking