By Heather Iacobacci-Miller January 03, 2010
I apparently have been really lacking in the sleep department. Didn't make it too much past 10 pm last night and slept until 8:50 this  morning. I NEVER sleep in like that. I was a bit disoriented and kept rechecking the time in disbelief. I guess I was really tired though and didn't even realize it.

This morning I decided to try Shock Cardio Athletic Step. This was a good, straight-forward, no frills step workout. If you've done Cathe's step workouts before, then none of the moves will really throw you for a loop. It was fun, time flew by, but it was shorter than I would have liked. So far, that is really my only complaint about the Shock Cardio workouts I've done. They have all been fun and time really does fly by (no clock watching). But they are short so calorie burn overall is lower. But they are definitely ideal for time-crunch days or when you plan on doing an upper body weight workout as well.

Speaking of weights, I decided to start the Total-Body Training Workout that I recently talked about. Today's workout was done with 3 sets of 5 reps, so that meant heavy heavy heavy:

Chest - pushups as a warm up

It was a cold and gray out today. And after running around so much with my sister yesterday, I officially declared today a sweats and no makeup day. It's not something I do often. I usually feel like a lazy slug if I don't get fully dressed and made up. Thus, I still managed to be productive, so I didn't feel nearly as bad about staying in sweats.

I had plenty of chores to keep me busy. You know, the fun stuff like laundry. I did decide that it was a good day to do some baking. My five-year old niece specifically requested that I make a batch of my French bread rolls especially for her to keep at her house. I cook them just slightly under done, freeze, then they can be toasted up any time you just want a roll. She loves them, and I just couldn't resist the request. So, I made some mini-sized rolls just for her. Also, my sister's birthday is coming up, and she wants me to help her with the food for the party. She wanted to do various types of bruschetta, so I also made two loaves of ciabatta bread that she can use. It's the least I can do right? And it sure beats store-bought!

After making something for others, I decided it was time to make something for myself (and husband of course). For dinner I made Spaghetti Squash with Tomato, Artichoke, Chickpea & Caper Sauce. We had a large salad on the side along with some toasted ciabatta bread. I just couldn't resist as the whole house was smelling like freshly baked bread already.

1 can chickpeas (rinsed and drained)

Microwave spaghetti squash approximately 5 minutes; this will make it easier (and safer) to cut in half. Remove seeds (save to toast up, yum) and place halves on cookie sheet. Bake approximately 45 minutes at 375 degrees, or until soft.

Drag a fork through the flesh of the squash to remove the strands.

For the sauce, cook the tomatoes, artichoke, tomatoes, wine, and spices in a large skillet. Let simmer until sauce thickens (your preference), approximately 15-20 minutes. Toss in spaghetti squash (about half of the strands) and toss in pan until coated. Plate and serve. 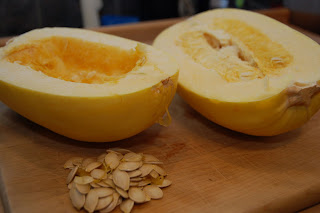 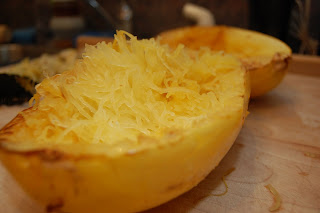 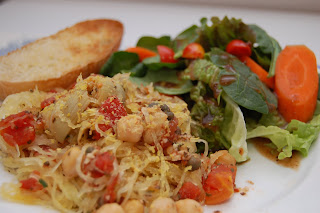 Don't forget to toast up the reserved seeds. Thank you Alicia for reminding me about this! Rinse and dry seeds. Add spices of your choice (I use a pre-made blend I make and keep on hand that includes salt, pepper, cumin, red pepper, chili powder, garlic powder). Spread out on baking sheet and toast at a low temp for 30-45 minutes until crisp and toasty.