By Heather Iacobacci-Miller January 26, 2010
Today ended up being a long one for me. It was a cold walk in again, but at least the wind didn't immediately undo my hairstyle. When I got to the office and saw my calendar for the day, I realized I pretty much had back-to-back meetings from 9 am until 2 pm. I opted to just stay through lunch and leave early (not really early as I put in my 8 of course).

I was kind of excited about leaving at 3 and getting my workout done earlier. I thought I could put in a good cardio, some abs, then have time to experiment in the kitchen. Got a couple of ideas brewing that kept me up last night. Well, got home and started my workout - Cardio Fusion. It's usually a high calorie burner for me. I don't know what the deal was today though. I could not get my heart rate up and it'd drop the second I wasn't pushing all out. It was very frustrating. I've done that workout enough to know what my heart rate typically is throughout the workout. I was easily 5 and 6 below what I normally do. I don't know if it was my monitor or me. I felt like I had to be overly exaggerated with moves just to get my heart rate going and keep it from dropping. The highest I got was 162 and that's not normal for this workout. I was very frustrated and ended up getting downright ticked off with myself. I know that seems extreme, but I was just so frustrated. It felt like a waste of time and like I might hurt myself in the end.

This isn't the first time. I seriously don't know if I should blame the monitor or if it's an over training issue. Over the past three weeks, I have cut back by at least an hour. I was working out right at 8 hours a week. Two weeks in a row I did 6:45, and last week was 7:15. I thought that cutting back would help.

Have you ever had that happen? How much do you typically workout during a week (cardio and weights)?

By the time I got into the kitchen, I wasn't in such a chipper mood. But I had resolved myself into trying a few new things, one was more about getting a piece of the puzzle prepped to make assembly easier for another day.

I absolutely love lasagna, but not how bad it is for you. A few times I've made lasagna using Japanese eggplant in lieu of noodles. I wanted to try to make it even healthier, so I found a recipe for a cashew ricotta to try out. So I made that today. I'll post about it later.

My uber-healthy blogger buddy Alicia @ Vegan Epicurean is having a Healthy Cooking Challenge.  The goal is to take a childhood or family favorite dish and veganize it and make it healthy. I couldn't think of anything in particular that I just craved from my childhood. Until the middle of last night that is. My mom used to make a Broccoli, Rice, Cheese Casserole that I adored. It used white rice, Velveeta cheese, cream of mushroom soup, onions, and frozen broccoli. Oh it was creamy and good! How to make that vegan? Healthy? I thought of Alicia's Cheeseless Queso that I've been playing around with. Surely that could be made to resemble melted Velveeta and creamy enough to take the place of cream of mushroom soup. So here's the method to my madness:

sea salt and pepper to taste

Cook wheat berries in water approximately 1 hour until soft. After about 45 minutes, add in shiitake mushrooms, garlic, salt, and pepper. 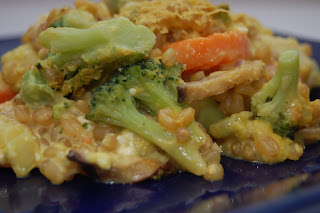 I served with Tuscan Breasts by Gardein. The product is vegan and is touted by Tal Ronnen in his book The Conscious Cook: Delicious Meatless Recipes That Will Change the Way You Eat

While the casserole didn't completely replicate mom's casserole, it was quite tasty. It did have a creamy, cheesy flavor. I do wish I'd had the fresh broccoli, but the frozen veggies worked. I think it'd also work well with pearled barley. I really enjoy the texture of the wheat berries and the grown-up flavors of the shiitake mushrooms. Maybe next time I will try to make a mushroom sauce rather than cook the mushrooms with the grain.