By Heather Iacobacci-Miller January 24, 2010
Well thankfully today I managed to wake up on the right side of the bed. The sun was even out and shining for a change. Though, sadly, it has clouded back up again. I was feeling really lazy about a cardio workout I must admit. My legs aren't totally sore from weights yesterday, but there is just that hint of tiredness going on. I managed to do 2 Shock Cardio HiiT workouts though. I started with 40/20 and then kept on going with 30/30. Good times. I then opted for a pilates-based abs workout from STS Abs Circuit. I don't do that one often because it's 20 minutes. But it was very calming and relaxing. I'm glad I chose that one today.

I had some errands to run, so I did that while Jason got out on his bike for a ride. You have to take advantage of even the remote ray of sunshine when you can. After, we decided to be bad and have a late, unhealthy lunch at a local pizza joint called Vino's. It's an interesting spot to say the least. You'll see men in business suits, then people covered in tattoos and more piercing than you care to count. Very eclectic dive. It's a fun place to sit back, indulge in pizza and beer, and people watch. Oh, and they have their own microbrewery on site.

So, after stuffing our faces with pizza, we felt like dinner should be on the lighter side. You know, balance it all out right?? I decided to try a Hot and Sour Coconut Soup from The Urban Vegan

. The temps dropped here throughout the day, and a soup sounded pretty tasty by the time dinner rolled around.

1 stalk organic celery, sliced (did not use)

2 cans water (use coconut milk can)

Saute onion, garlic, celery, carrot, and ginger in oil on medium heat until soft. Add hot-and-sour paste and saute a few minutes until combined. Add protein, agave, and mushrooms, saute for a few more minutes, then toss in the coconut milk and water. Bring to a boil and add the lime juice.

Add noodles. Stir well and turn heat down to low. Cook on low until noodles are soft, about 15 minutes. Careful to not overcook. 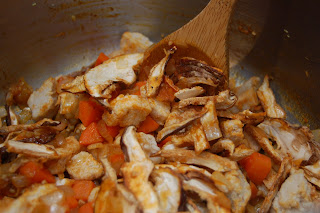 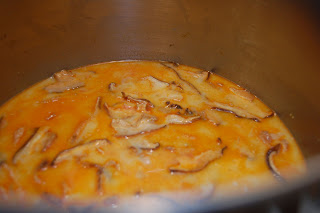 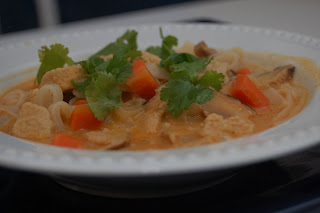 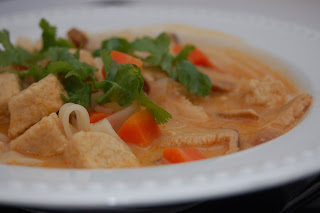 This soup was so fresh and refreshing. It felt like a major indulgence. This is most definitely a keeper recipe.