By Heather Iacobacci-Miller January 31, 2010
Working it Out
Ah, finally some sunshine today. We definitely needed it to help melt off the rest of the ice as well. I was feeling rather lazy at the start of the morning. Finally got myself into gear and did Cathe Friedrich's Imax 3, abs, and tried a Yoga Fusion by Angie Stewart from On Demand. It was interesting, not as calming, but it was also not a true yoga workout either. It was definitely a nice stretch for me though.
Errands and Detours
After my workout, Jason and I still needed to get by the regular grocery store. We made a few procrastinated detours like TJ Maxx and Barnes and Noble. I had a meet the baby shower to get to at 3 pm. I'll be completely, I'm not an ooey gooey baby person. I was never really around many babies, so maybe that's part of it. I did get better after my sister had kids. I just don't know what to do with children. My husband says, "Just act like one." Well, that'd be problem number one. I never really acted like a true child to begin with. It's hard for me to let go and be silly. Anyway, long story short, I didn't stay long. I will go back over and meet the baby and hold her when it's not amid a big crowd of other moms.
Baking and Cooking
When I got home, I started ciabatta bread. I imagine we'll be having some soup this week, definitely a Kabocha Squash soup and I just love toasted bread with my soup. I also made up some of the overnight steel cut oats for breakfast this week. It's such a simple thing to prep. I make the following amounts and it gives me two servings (could probably stretch it to three):
Overnight Steel Cut Oats (for 2)
Ingredients:
1 cup water
1/2 cup steel cut oats
dash of salt
cinnamon to taste
1/8 tsp (maybe less) stevia (optional)
Directions:
Bring water to boil then add remaining ingredients and simmer over low until liquid is absorbed.
Divide into containers and refrigerate. When you're ready to eat, add a splash of soy milk (I use vanilla) and microwave approximate 35 seconds. Stir and add in fruit (I add blueberries) and microwave another 35 seconds. I also stir in additional cinnamon and protein powder. Both totally optional. I have also used grated nutmeg. It makes for a nice, hearty, and quick morning breakfast that totally beats out any pre-packaged oatmeal you can find.
Free-Form Ravioli with Tofu Kabocha Ricotta & Spinach Pesto

I also got going on the Tal Ronnen recipe that I've been wanting to make from his cookbook The Conscious Cook. I have been itching to try his Free-Form Ravioli with Tofu Ricotta & Arugula Pesto. As I noted in my book review, the dishes are broken down into mini recipes. So my version is Free-Form Ravioli with Tofu Kabocha Ricotta & Spinach Pesto. This is how he breaks down the dishes (my changes noted).
Pasta dough - Did not use Red Palm Oil. In all honesty, I was too cheap to shell out the bucks on something I don't know if I'll use again. So, I just used olive oil.
Arugala Pesto - I used spinach and also added a splash of lemon juice
Tofu Ricotta Filling - I added roasted Kabocha squash
Assembly
Note: you do have to have the cashew cream pre-made and that takes one day because of soaking the cashews.
I served the dish with a large salad of red leaf lettuce, spinach, tomatoes, Greek olives and a balsamic vinaigrette. 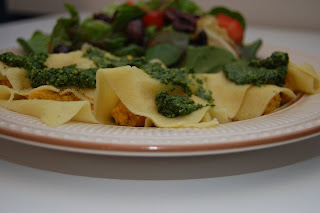 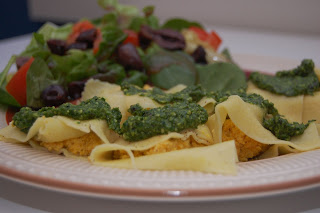 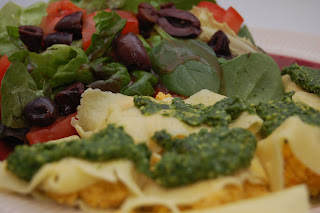 This dish was really good. I do think (and Jason agreed) that the pesto could have been thinned out, perhaps with some pasta water. Typically you can toss the pesto and pasta to coat, but since this was free form, you just had to top the ravioli with the pesto. The filling was really tasty and would be good spread on bruschetta as well. Overall, this was a really great dish; however, it was rather time consuming to make. The filling and pesto were super fast, but the pasta did take a little more work. Would I make it again, yes. But it definitely falls into the "special dinner" category.