By Heather Iacobacci-Miller January 08, 2010
Living in the south, we don't have to endure the cold quite like the rest of the United States. I am of the firm belief that 70 degrees is borderline chilly in fact. This week has been in the upper 20's, so you can imagine how I'm feeling about that. Last night it dropped down to 11 degrees (not including wind chill). Well, having a 3-block walk at 7 am with the temp hovering at 11 degrees was not my idea of a good way to start the day, nor end the week. My husband works directly across the street from me, and the wonderful man that he is, he dropped me off at my office. He goes in at 9 though. So today I opted to work 9-5 through lunch. It gave me the opportunity to get up and workout this morning though, without having to get up painfully early. I did Cardio Fusion and abs. It was a great workout actually. I haven't done that DVD in a few weeks, so it didn't seem as boring. Time flew by.

I also had time to prepare a proper bowl of steel cut oats using an overnight method that Jessica raved about (she borrowed from Jenna at Eat Live Run). I will say that it made far more than I'm used to eating, and I'll keep that in mind. But it was really yummy and very filling. I love the nutty flavor and denser texture of the steel cut oats. For my version, I added vanilla soy milk, more cinnamon, vanilla protein powder, and blueberries. This may be one of the very few breakfast photos I post on a week day! However, I do think that I may start taking the time to do this recipe more often and reheat when I get to the office. It really left me satisfied until lunch. Normally I have a snack in between, but today I was just still too full. Lunch (sorry, now picture as I was at work) was red leaf lettuce, spinach, roasted red bell peppers, artichoke hearts, chickpeas and a balsamic vinaigrette. YUM. 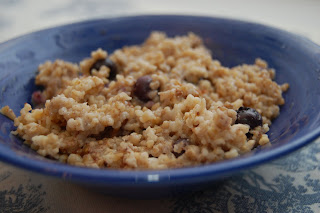 Tomorrow is my sister's birthday party. Her birthday is actually Sunday, but you just can't have a proper bash on a Sunday. This will be her first birthday party for herself since her divorce this fall. I am going early to help her with everything. I'm doing most of the food for the event. Sort of a gift to her. I will let her take on the meat dishes though! The menu is a bit rough and hodgepodge right now. It'll likely change up a bit tomorrow. For the moment though, here is the plan: