By Heather Iacobacci-Miller February 20, 2010
Friday Follow Up
Last night was a ton of fun. I always enjoy getting to hang out with my sister. We started the evening off with a happy hour at Big Whiskey's then back to the house for homemade pizza and wine. I had pre-made my usual Wheat Pizza Dough Thursday evening, but we did end up having a friend of Jason's stop by. So, I dug out an old recipe I had on hand for a super quick Whole-Wheat and Honey Dough. This one does not really rise, it's a much flatter, crispier type of crust. But it really works in a pinch.
Tim was super nice and brought over some wine to share. It went perfect with the pizza, which no one complained about! One was made up Greek style with sundried tomatoes, kalamata olives, spinach, artichokes, banana pepper rings, roasted red bell peppers, and feta. For the other pizza, half was made with vegetarian pepperoni, sauteed green bell peppers, onions, and garlic. The other half had sauteed squash, green and red bell peppers, and onions. There was not a single piece left so I did something right! 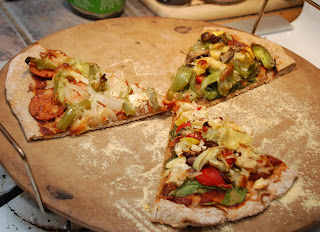 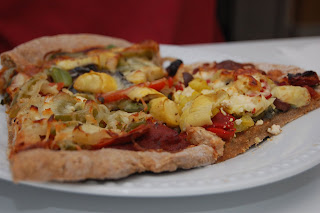 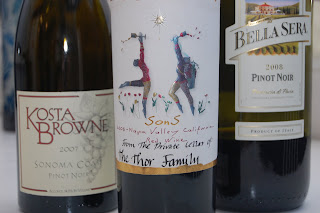 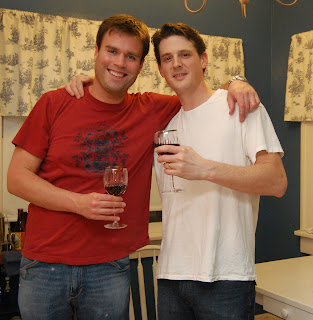 Workout Cake Iced with HIIT
This morning I started my workout with one segment from Give Me 10 by Amy Dixon. It was just a quick 10-minute workout I used as a warm up. I found it on On Demand and wanted to give it at try. It was a no-frills cardio segment. I would be interested in trying the other segments at some point. Weights were 3 sets of 12 reps, and I iced the workout cake (aka fried the legs) with Shock Cardio HIIT Pyramid. Muscles were quivering!
Biceps - Zottoman Curls
Triceps - Lying DB Extensions
Chest - Decline DB Press
Back - Underhand Rows
Quads - Step Ups (12" step)
Shoulders - Upright Rows
Laid Back Saturday
We really had several errands to run today. However, right as we were heading out the door, we got a call from some good friends who were having a late lunch at one of our favorite pizza joints, Vino's. They recently had a new baby, so Jason and I really wanted to meet up with them to catch up and see the new addition to the family. Needless to say, we did not get around to all of our errands. We did, however, make it by the Asian Food Market, which was top on my list. Loaded up on Japanese eggplants, kabocha, dried shiitake mushrooms, sweet potatoes (a and an assortment of other goodies I can't wait to use.
After reading a recipe post from The Ordinary Vegetarian for Chipotle Mashed Sweet Potatoes, I have been dying to try them. So dinner tonight was mostly planned around Sarah's recipe, which I adapted for a less sweet version. If you like your sweet potatoes on the sweeter side, please check out her amazing sounding recipe. I had purchased a package of Gardein Chick'n Filets on sale. I decided to make a chipotle mustard sauce to top them with along with Smashed Chipotle Sweet Potatoes and roasted asparagus.
I made the chipotle mustard sauce using Stonewall Kitchen Maple Chipotle Mustard and thinning it out with low-sodium vegetable broth.
Smashed Chipotle Sweet Potatoes
Adapted from The Ordinary Vegetarian
Ingredients:
3 sweet potatoes*, peeled and cubed 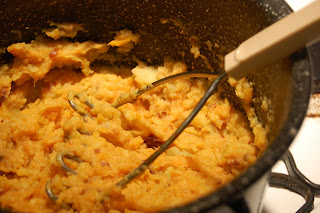 I cooked the Gardein Chick'n Filets on a stove-top grill brushing with the chipotle mustard sauce. I tossed the asparagus with a lemon infused sea salt, black pepper, drizzle of olive oil and roasted until tender. 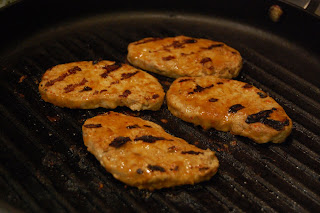 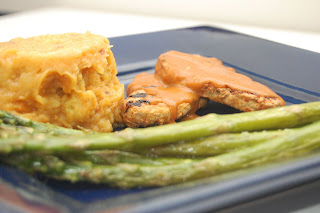 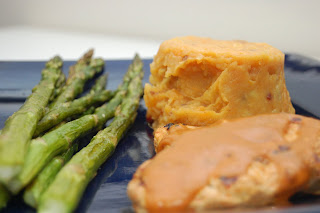 I must say that the potatoes were fantastic. Not too sweat, not too hot. I'll most definitely be making these again.