Having Fun in Branson

By Heather Iacobacci-Miller February 13, 2010
Friday Night In Branson
I've been hearing a lot about Popchips. I had not seen them in the stores yet, not that I was searching really hard for them to be honest. But, I saw these bad boys at my new favorite service station last night in Branson, MO. White Oak Station at 3200 Green Mountain Drive. I seriously don't have favorite gas/service stations, but this one my friends, is my favorite. Wine, Beer, Liquor, Popchips, and a sections of gourmet cheeses and crackers to go with the wines! HELLO! How fun is that? 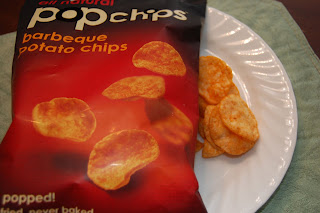 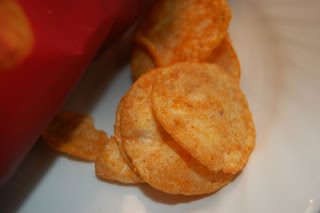 I am a chipaholic. I rarely buy them because I'll eat the whole bag. I used to eat Baked Cheetos for lunch every single day, every single folks. I was afraid they'd go out of business when I stopped buying them. So when there is a chip that's supposed to be healthier, I feel that it's my duty to give it a try. These were sooooo flavorful. I loved the light, airy, but super crunchy factor. They are apparently popped (hence the name) and not fried is why they are healthier, not because of any super healthy ingredient unfortunately. I did good and only had about 3 of them, not 3 bags, just 3 chips. It helped that I had eaten a the biggest salad ever. Which takes me to Ruby Tuesdays...
...I found a new favorite restaurant. Ruby Tuesdays. Jason and I almost never go to chain restaurants. There are too many locally owned places that are far superior. However, in Branson, it's mostly chains. We were both starved and getting cranky after unloading the car. Yes, we had snacks, but we seriously wanted a happy hour drink. I won't lie. Ruby Tuesdays ended up being our landing spot. I figured they'd have at least one appetizer I could eat. Little did I know they now have a huge, awesome, veggie laden salad bar! Seriously, when did that happen? I've been missing out. They had 4 types of lettuce, spinach, broccoli, shredded carrots and zucchini, vegetarian/vegan friendly proteins like edamame and chickpeas, pasta salads galore, and even beets. Yep, I finally tried beets courtesy of Ruby Tuesday's endless salad bar. I have been missing out. They are slightly sweet and have a hearty, earthiness to them. I am so glad that I picked some up this past week. Unfortunately I dove into my mounded salad of yumminess before thinking to take a picture. I'm not used to photographing my food in restaurants.
Oh, and as Jason said, "We were Rachel Ray-ing it." We sat at the corner of the bar and ended up chatting it up with a couple who lives in Branson. They just happened to have been at the Oaklawn Race Track in Hot Springs last weekend. They were there on Friday and we were there on Saturday. so that was the start of the conversation really. They gave us suggestions on good places to eat. The lady's son apparently owns a wine garden here. We may be meeting this couple there tomorrow! I'm definitely not one to chat it up with complete strangers, but I need to step out of my comfort zone more often. We had a really great time and got some good tips and info about the town. So I think I have a new goal: Be more social.
Back at the condo, Jason turned on the Olympics. We eventually heated up the Red Lentil and Tomato soup for a late dinner accompanied by a pinot noir. Yum.
Saturday in Branson
Tackling the Treadmill
This morning we got up and hit the gym. My goal was to eek out at least 30 mins on the dreadmill. I loathe running on the treadmill typically. However, I was able to turn on the Food Network and zone out. 40 minutes later Jason was asking when I was going to be done. Humph. It really ended up being a good run, and I felt great. It's the longest run I've done in ages (a little over 4.5 miles).
Shopping Spree
After the gym, we cleaned up and I started my second round of cardio: Shopping Cardio. Hi, my name is Heather, and I am a shopaholic. I was almost giddy as we pulled into the parking lot of the Tanger Outlet Mall. Ann Taylor Factory Outlet was like a shining star! Yep, that was my first stop, then Lucky Brand Outlet. Um, $130 jeans for 29.99 = WIN. I also scored at Banana Republic, The Gap, Old Navy, and BCBG.  Jason may make fun of me and my shopping sprees, but he gets into it too. In fact, he may be worse than me (if that's possible) once he gets going. So, needless to say, we loaded up and lightened our wallets!
Savory Salad
After the power shopping, we were starved. We definitely waited way too long to eat. We opted for Ruby Tuesdays again because I really wanted that darn salad bar again! This time I remembered to take pictures, but they didn't turn out so hot. Old point and shoot needs an upgrade. I loaded up with a spring mix, spinach, broccoli, edamame, chickpeas, shredded carrots, zucchini, black olives, grapes, baby portobellos (not button mushrooms folks, how cool), beets, and drizzled with balsamic vinegar. YUM. 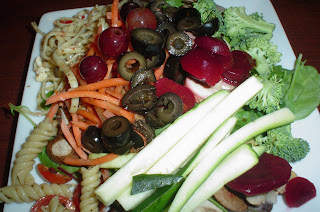 My dad and step-mother made it up safe and sound. She forgot a book, so they're out book hunting right now. Not sure what we'll do for dinner tonight. Jason and I brought a stack of movies, so I imagine that's what'll be on the agenda after dinner.
What's your absolute favorite store to shop at?