By Heather Iacobacci-Miller February 28, 2010
Paella Follow Up
As I mentioned yesterday, we had a birthday party to attend. The theme was being a paella party, so I volunteered to bring a vegetarian version. However, I've never had paella before and had no idea if I'd even like it. I'm really not much of a rice eater either, so anyone who really knows me would think it an odd choice. But, I'm always up for trying a new recipe, so why not.
Vegetarian Paella 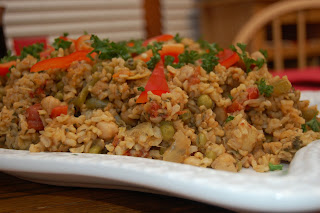 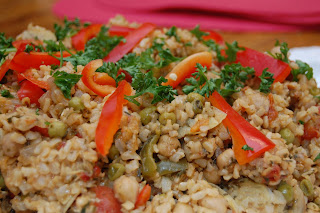 Notes, I believe that I added in the peas too soon so they turned brown. So if you aren't using quick-cooking brown rice, then don't pay attention to the cooking times shown in the original recipe. You'll also need more liquid as well.
As for the flavor, I thought it was a little bland. Again, no idea what to expect. It wasn't bad by any means, but maybe my feeling towards rice skews my judgment a bit. Jason said it was really good, as did anyone who tried it. I do think that I could try adding flavors used in chorizo, like paprika, to give it more oomph. If any of you paella lovers out there make this and try it, I'd seriously like to hear your results and thoughts!
Simple Sunday
Today we had to finish the errands that at we so happily put off yesterday. It was another sunny day here, though not quite as warm. After the grocery store, I decided to do cardio, abs, and a floor work workout for glutes and thighs. Cardio was Cathe's Imax 3. I love this DVD. It consists of 10 intervals of a simple step routine followed by a cardio blast. After finishing I went right into the floor work from Butts & Guts and finished with abs from the same DVD. If you are ever in the market for a lower body workout that'll kick your booty into shape, Butts & Guts is definitely the one for you! OUCHIE.
After the workout, Jason and I both tried to do some cleaning: laundry, bills sorting, paper shredding, all the fun stuff that gets put off week after week. We did open up all the curtains to enjoy the sunshine though.
I had a butternut squash that I'd been wanting to use. So dinner tonight was Black Bean and Butternut Squash Chili.
Black Bean and Butternut Squash Chili 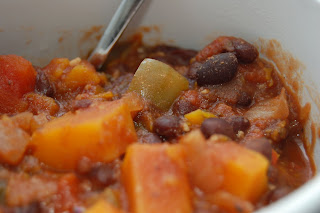 I added the poblano pepper mainly because it needed to be used. I'm not sure how much additional flavor it really added, so it's totally optional. I do love this chili because of the textures and flavor combinations, it's a hearty, healthy meal.