Well, It Was a Monday

By Heather Iacobacci-Miller February 22, 2010
The Monday Blues
I'm having some serious Monday Blues today. I think part of it is the lack of sleep from last weekend and then the lack of sunshine. I keep beating myself up for not being as productive as I envision myself to be. However, I still managed to get a lot of pre-made dinners completed. I guess it's just a matter of defining productive. Productive as in chores (dusting, mopping, laundry), productive as in completing kick-butt workouts, or productive as in getting 2 types of veggie burgers made, ciabatta bread, and then dinner.
How do you define being productive?
Making (HI)it Happen
While I was awake this morning in plenty of time to get my workout done, I didn't. I had everything set up, but it just wasn't going to happen. I slept fitfully in the early morning hours. Just not able to get comfortable. I think I need to go pillow shopping. Also, I was dreading the weights today to be honest. You'll see why when you read the sets/reps pattern. I was feeling so drained and thought that doing the workout at lunch might give me a much-needed boost. It really did help my mood I must admit. I did the warm up from Shock Cardio HIIT Pyramid, then weights, then finished HIIT Pyramid totally frying my legs! Weights were supersets of 3 sets of 18 (holy cow) reps with the goal of increasing the weights 1.25-2% from last week:
SS#1
Chest - Dumbbell bench press
Back - Double arm rows
SS#2
Quads - Squats
Shoulders - Lateral raises
SS#3
Biceps - Dumbbell curls
Triceps - Double arm kickbacks
This workout made me realize that I need to focus on some muscle endurance. OUCH.
Monday Meal - Follow-Up on Recipe
Dinner tonight ended up being the Black Bean Beet Burgers that I made yesterday with baked sweet potato "fries." I topped the burgers with spinach, roasted red bell peppers, and vegan mozzarella. 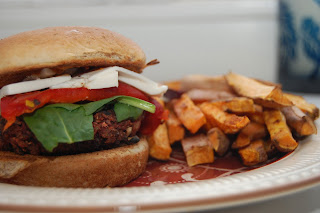 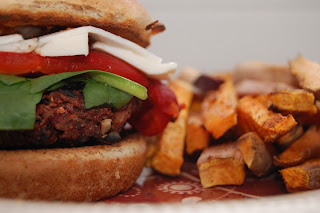 These were very interesting. I liked the texture of these as opposed to some of the pureed veggie patties. The earthiness of the beats goes well with the black beans. The next time I make these, I will use less brown rice, more black beans, and mash the beans a little more so that they will hold on or bind the beets better. They did seem to want to crumble, but that could have also been from baking rather than pan frying perhaps.