By Heather Iacobacci-Miller February 10, 2010
Yawn - Morning Workout
This morning the streets were still slick in spots from the packed snow and ice. My car took forever to de-ice and thaw out. I decided to work 8-4 in hopes that the sun would come out and help with the de-icing of the car. Lucky for me, it's cloudy. But, at least it wasn't pitch dark when I attempted to get the old buggy going. Just cold! We definitely need some major doses of sunshine to get all this snow and ice off the sidewalks and streets. I think walking in to the office is the most dangerous part now.
I took the opportunity to get in my cardio and abs workouts done this morning. I chose Cardio Fusion and abs from Cardio and Weights. Nice sweaty workout to get my energized for the day ahead.
I'm sort of getting used to going in a bit later. Not sure how well I'll be functioning at regular time tomorrow. May end up not doing a morning workout!  We'll see how it goes. I do need a spotter for chest work, so if I do that early, then Jason will be home to help out.
Yawn - Uninspired Dinner
Dinner tonight was another less-than creative affair. However, that doesn't mean it was bad. We had some bok choy that was on it's last legs and had to be used. So I just threw together a quick, easy stir fry using frozen mixed veggies, bok choy, green beans, and Quorn Chik'n Tenders served over barley. I used House of Tsang Szechuan Spicy Stir-Fry sauce, too lazy to make my own tonight. I like this particular flavor because of the heat. It's low in sugars too. Sodium, um, we'll skip that one tonight. 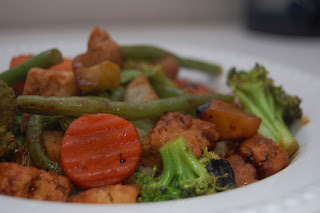 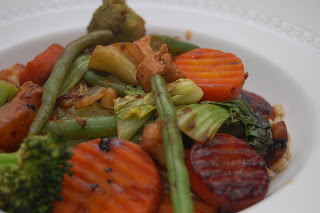 No Yawn Here - Inspired by Blog
On sort of a serious note, Jessica @ EatDrinkBreatheSweat had an awesome and inspiring post today on "Confidence and Embracing Inner Peace." She shared a video called "Embrace Your Flawz." It's truly a must-see video, especially for women.
I know that I am so very guilty of pointing out and hating every single flaw. But why? Those flaws are what makes me, me. There are some "flaws" that I have gotten over and embraced, like being short. Besides, can't change that right?! I also used to hate being so petite. It meant flat chest, looking "cute" not pretty, and coming across as very young. Um, now that I'm mid-30's looking younger is A-OK! But I still hate so many other things: nose, full face, super fine hair, moles. But rather than hating them, dwelling on them, I need to learn to love them. They are a part of me. I mean, I could get plastic surgery, but I hate needles so that won't be happening. So accept it, love it, move along! I think it's also important to remind ourselves about what we do love too. I love my biceps and shoulders for example. I love my hair color. I refuse to color it. I actually love my brown eyes now.
Have you accepted your flaws? What do you love most about yourself?