By Heather Iacobacci-Miller March 05, 2010
Fabulous Friday
I managed to get up and get my workout in again this morning. It was easier because Jason had an alarm set for 5 am to go to swim. Not much point in trying to go back to sleep for an hour when it takes me 30 minutes just to drift off most of the time. So I chose Cardio Fusion. I like this workout because it is a compilation of 3 other workouts so you don't get bored. Just when you think you might, you're on to something else like football runs.
I also got in a second cardio today when we had a fire drill. I'm on the 10th floor by the way. It took 10 minutes to get out of the building. We only have 5 elevators, so taking the stairs is actually must faster. Makes me very very glad to be in shape!
It felt like such a great day, even if I worked 9 hours. I think it was the sunshine and warmer temps. Everyone seemed to be in better spirits. I plan to carry this energy over into the weekend. Tomorrow I plan on getting in a run outside. It's supposed to be sunny and low 60's!! Simply cannot pass up this opportunity. I will also do weights. A week off is more than I can handle. I know that I'll feel stronger and more energized though after the brief respite.
Fajita Friday
Tonight I decided on fajitas. It felt like a Mexican kind of day. Jason and I snacked on some White Cheeseless Queso as an appetizer. During lunch I had him start marinating some tempeh in a Cuban Mojito sauce that I had bought during one of my sauce sprees for fajitas.
Mojito Fajitas
Ingredients:
1/2 jar Mojito sauce (or other sauce of your choosing such as chimichurri)
1 package tempeh
1/2 yellow onion, thinly sliced
1/2 green bell pepper, thinly sliced
1/2 red bell pepper, thinly sliced
1 zucchini, thinly sliced
1 small - medium poblano pepper, thinly sliced
To taste: sea salt, black pepper, cumin, chili powder, red pepper, garlic powder, lemon or lime juice.
Whole-wheat tortillas
Shredded cheese and/or sour cream (vegan or non-vegan, optional)
Directions:
Slice tempeh in half and marinate in sauce. In non-stick pan or grill pan, cook all ingredients until tender. 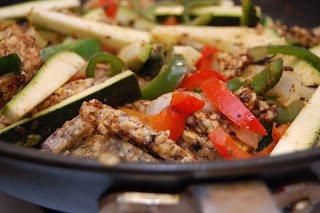 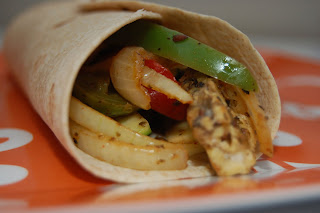 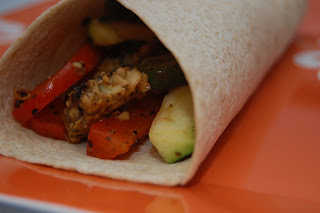