By Heather Iacobacci-Miller March 20, 2010
Friday Follow-Up
First off, I want to thank everyone for their great comments! Sounds like everyone is on the same page. I love the open-minded attitudes and notions of living life to the fullest. You guys are awesome!
Dinner did end up being pizza...on the grill. Grilled pizza wasn't the intention mind you, it was dark out and not part of the plan. I had turned on the oven to pre-heat and to heat up the pizza stone. When I was done with the toppings and had the dough rolled out, I asked Jason to pull out the stone. It was, well, stone cold. No heat folks. The burners were working just fine, so we have no idea what's up with the oven. Thankfully we have a gas grill that we were able to use. The crust was definitely crispier, but not in a bad way.
My half of the pizza was my very predictable Greek style of spinach, artichokes, sundried tomatoes, banana pepper rings, roasted red bell peppers, and feta. Jason had been wanting to try a muffuletta style pizza. One of our favorite pizza joints makes one (obviously lot vegetarian) so he thought it'd be fun to make a vegetarian version. His half included a chopped olive mixture, jardiniere veggies, vegetarian salami, ham, and pepperoni, topped with provolone. 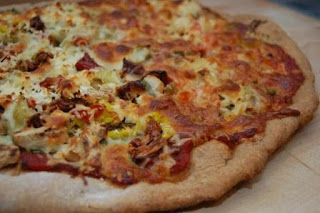 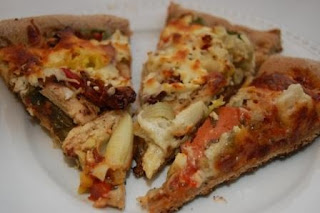 Saturday Drop Sets
I woke up starving this morning and decided to make a bowl of oatmeal. Usually on the weekends I'll have something other than my typical oatmeal breakfast. But I was craving bananas and peanut butter so I decided the only thing I could do was to make PB&J&B Oatmeal. Just follow the directions for making steel cut oats (or rolled if you prefer). I topped with 1 tbsp natural creamy peanut butter, 1 tbsp sugar-free strawberry preserves, and 1/2 a banana. Oh, I cooked my oats with small amount of stevia and healthy dash of cinnamon. I know I don't normally post breakfast or lunch eats, but this was just too yummy. 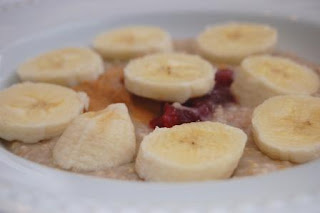 Today I decided to do chest, back, shoulders this morning using a drop set method. I did each exercise using the same weight, but dropping the number of reps with each set: 12, 10, 8, 6.
Chest
Flat bench flyes
Flat bench DB presss
Incline flyes
Incline DB press
Back
Double-arm row (flat back)
Pullovers - 25
Underhand DB rows's
Shoulders
Standing DB press
Side lateral raises
Rear delt press
After weights, Jason and I decided to go for a run while the weather was still holding up. The dogs pretty much invited themselves along, so the first 1.5 miles was a bit stop and go. We ended up doing a little over 4 miles total today though my left hip flexor was feeling super tight. I really hope I don't regret it tomorrow, which is scheduled to be a leg day.
Saturday Salad
We had some grocery errands to run. I picked up some almond butter today. I am almost afraid to open it for fear I'll eat the whole jar, or at least more than I should eat in a single sitting! Since it was still mostly sunny and warm, we decided to have a late lunch at a restaurant we enjoy for the patio dining option. It was so nice to sit outside and eat. The temps were hovering at 70 today. It's so hard to believe that it's only supposed to be 45 tomorrow. Spring is such a tease isn't it?
Since our lunch was so late, neither of us wanted a super heavy dinner. I've been wanting a taco salad lately, thanks to seeing some delicious looking salads posted by some of the bloggers I follow. So, I decided to do a Lentil Taco Salad. Basically, I cooked up some lentils and spiced them up with cumin, salt, pepper, red pepper, chili powder, and garlic. I topped a bed of lettuce and spinach with the lentils, fresh tomatoes, diced red and yellow bell peppers, jalapenos, and some salsa. Rather than using tortilla chips, I crisped up whole-grain tortillas that I spiced up with salt, garlic powder, and chili powder. 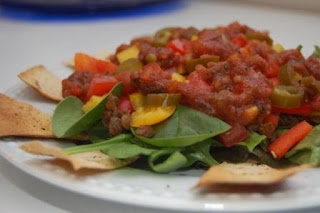 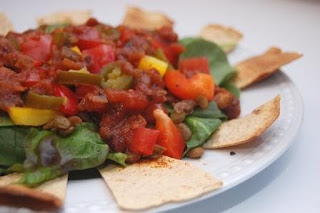 I did end up adding some shredded 2% Mexican-blend cheese. I think that a Cheeseless Queso would have actually have been better. Other topping options could be sliced olives, corn, or sour cream.