Sick but on the Upswing Means Soup

By Heather Iacobacci-Miller March 02, 2010
Well, I'd hoped I just had some sort of 24-hour bug. Most of the people I have known that have had a stomach bug recently only had it for 24-hours. Apparently I have something more or another type. I have only managed to keep down about 3/4 a protein shake that Jason made for me (and sort of forced down) last night. Tried another one this morning, not so lucky. To me, this type of bug is worse than sinus infections or anything else.
Can I say that right now the things I miss most are food and being able to workout. Though, food really doesn't sound appealing, it's the idea that I can't have it perhaps. On the upside (if there is one), I have gotten TONS of sleep. That's really all I've been able to do since Sunday night. I'll be caught up on sleep for months to come at this rate.
I will say that I'm very lucky to have the husband I have. I'm used to just taking care of myself when I'm sick. I try not to ask for anything unless I seriously can't do it for myself. This was one of those times I did need help. He was so patient and concerned. He went out and got Theraflu to try to help with my fever (since I couldn't keep down pills long enough to be effective), he made protein shakes, brought me water, you name it. He was brave enough to sleep in the same bed even, which is a super comforting feeling when you're not feeling so swell.
What is the worst you've ever felt? Are you a good patient?
Once again I slept the majority of the day. I did finally manage to get out of bed around noon and stay awake for the rest of the day (propped up on the couch). I don't know how people can sit and watch TV for hours on end, because I was just plain bored silly. By mid-afternoon, I was able to hold down a banana and 1/2 a Vitamin Water (that Jason got for me) and was starting to feel semi-human.
After finishing the Vitamin Water and removing myself from the couch I made a piece of dry toast and decided to start some soup for dinner just in case I was up for eating a real meal finally. I decided to make a Vegetable Soup.
Vegetable Soup
Ingredients:
1/2 yellow onion, diced
3 stalks celery, diced
3-4 carrots, diced
1 green bell pepper, diced
1 baking potato, diced
1 can no-salt tomatoes (with juice)
1 can chickpeas, rinsed and drained
16 oz low-sodium vegetable broth
1 cup water (or use 32 oz vegetable broth, I was just running low)
To taste: sea salt, pepper, garlic powder, basil, parsley, oregano
Fresh green beans
Directions:
In large pot, saute onion, celery, carrots, and bell peppers in small amount of extra-virgin olive oil until onions are soft. Stir in remaining ingredients (minus green beans). Simmer until vegetables are just beginning to get soft, then stir in green beans and cook until beans are done. 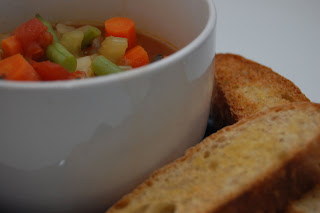 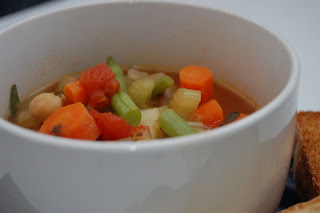 This turned out pretty good. If I had been feeling better, I would have likely added red pepper for a little bit of heat. The great thing about a vegetable soup is that you can add your favorite veggies!