By Heather Iacobacci-Miller March 21, 2010
Leg Day Sunday
So today started with another bowl of PB&J&B Oatmeal. I have some serious DOMS (delayed onset muscle soreness) happening from yesterday's workout. Wow. Good thing today was legs. I used the drop set method again for everything except calves: 12, 10, 8, 6.
Alternating front lunges
Squats
Alternating rear lunges
Plie squats
Deadlifts
Step ups
Calf raises - 3 sets of 25 turned out, parallel, turned outs
After my workout, I did just half of Shock Cardio HIIT Pyramid and Yoga-style abs from Abs Circuit then stretched.
Veggie Cakes on Sunday
It's rainy, cold, and dreary here today. I had wanted to bake some bread and do some other cooking today. However, the oven is broken so that didn't happen. I did manage to get lots of laundry done, Jason vacuumed the area rugs, and I swiffered up the doggy dust bunnies. I also tried straightening up and organizing the room that I am now using as my weight room. This house had once been a duplex and that particular room was a kitchen. There are tons of holes in the walls from where the cabinets had been hung. So, I got those filled in finally (we've been here 9 years by the way). Next is to repair the cracks in the plaster from having the house leveled. Then I get to paint it. I want something bright and happy for the weight room. We have lots of yellow/gold tones on the walls so Jason is afraid of another yellow, but I think yellow would be cheery. You need cheery doing weights! What would you pick for your exercise room?
Even though I didn't have an oven, I still opted to make up some veggie cakes based on the ones I had at Cafe 1217 when we went to the races a while back. I have a fairly good toaster oven that I used. It just took a lot longer to make all the "cakes" as I could only cook off 3 at a time. The veggie cakes that I had at the restaurant tasted to have been made with sweet potatoes and zucchini. So I used that as a starting point for my Quinoa Veggie Cakes. I served with a Red Bell Pepper Coulis and Barley Veggie Salad.
Quinoa Veggie Cakes
Ingredients:
1 sweet potato, diced
1/2 cup cooked quinoa
1/2 zucchini, shredded
1/2 cup minced red bell pepper
1/8 cup minced shallot
Flax egg replacer (1 tbsp ground flax, 3 tbsp water, nuke 20 seconds and let sit until egg-like consistency)
1/2 cup (approximate) spelt flour
To taste: salt, pepper, basil, parsley, garlic powder, red pepper
Directions:
Preheat oven to 400 degree.
Steam potatoes until soft.
In large bowl, smash potatoes, then stir in all ingredients minus the flour. Slowly add in the flour until desired firmness.
Form into patties and bake on a prepared baking sheet approximately 1 hour flipping once.
Red Pepper Coulis
Ingredients:
1/4 cup raw cashews (soaked at least 30 mins)
1 whole roasted red bell pepper
1 tbsp tomato paste
1/2-3/4 cups water (to desired consistency)
To taste: salt, pepper, garlic powder
Directions:
In food processor, puree cashews and 1/2 cup water to. Add in remaining ingredients and continue to puree until smooth, adding more water if needed.
On the side we did a Barley Veggie Salad that consisted of some leftover pearled barley, red kidney beans, yellow bell peppers, peas, minced red onion, diced tomatoes, champagne vinegar, salt, pepper, parsley, basil, garlic powder, and a basil tomato spice blend. 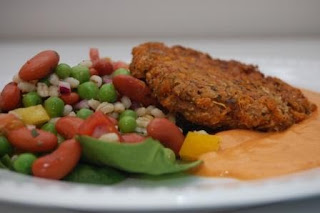 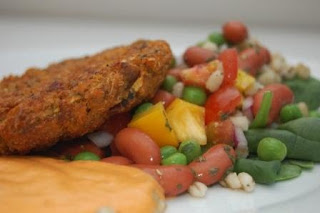 I'll say that these were absolutely better than the ones we had at the restaurant, and I'm not just bragging. The Red Pepper Coulis was a great sauce that helped to offset some of the sweetness of the "cakes". We will most definitely be making these again. The next time I think I'll try adding in some chickpeas for additional protein. Another side option would be a slaw.