By Heather Iacobacci-Miller March 25, 2010
Thankful for Friends
First off, I really want to thank everyone for being so kind yesterday when I posted about my blue day. I debated about the post because I certainly don't want anyone to think that I am fishing for sympathy. I did, however, think that it was important to be honest with what sort of day I was having and to share some great, inspirational posts by fellow bloggers. I hope those words can help you out at some point.
That brings me to another point. Friendships. I have blogged about this before, but yesterday it was even more so apparent that friends come from so many, often unexpected places. I received an email from a fellow blogger asking me how I was doing and letting me know that they were there for me. For me?? It was truly heartwarming to get that sort of support from someone I have never met and from someone who is going through so much more in their life right now. And they were seriously concerned about me. Wow. Not one of my long-time friends or even family commented, but this person did. So don't ever discount your words my friends. You never know when what you write or say will affect someone else's life or how it will affect them period.
Also, rethink the typical idea of friendship as being someone you know in person. Friends can be people you've never met. There are several bloggers that I do consider to be friends. We've never met, we've never even spoken to one another except through our blogs, possibly other forums, Tweets, or possibly Facebook posts. Does that mean they can't be considered my friend? Nope, I totally think of them as friends. How do you all feel about that? Do you feel like some of the bloggers you follow are your actual friend?
Sleep Trumped Workout
Sorry for being so deep today. I'll move along now. This morning I woke up around 4:15 just long enough to reset my alarm clock from 5:15 to 6:15. Sleep outweighed the workout, which would likely would have suffered. I thought it was supposed to rain the majority of the day, but the sun actually came out. I had seriously contemplated talking Jason into a run a lunch, but the winds were 20 mph! The gusts were 26. So, I may be fairly crazy, but I'm not totally stupid. That would have been one tough run. So, we just went home and ate lunch instead. I was due for a rest day anyway to be quite honest.
But...I ended up having lots of energy after work. I would have run if the wind hadn't been so extreme. I decided to do Shock Cardio Athletic Step then the floor work from Butts & Guts (for booty work). I had a great workout actually. It was fun, time flew by. I'm really glad I went ahead and went for it.
Inspired Dinner
After not wanting to be in the kitchen yesterday, I felt more like cooking tonight. I had some cherry tomatoes that needed to be used so I decided to finally try a version of Averie's Raw Marinara Sauce. I liked the simplicity of her recipe. I was, however, missing the red bell pepper. I did, however, have a jar of roasted red bell peppers. So, I decided to run with the "roasted" idea. Taking it from Raw to Roasted Marinara Sauce. I also did not have enough zucchini to use in lieu of pasta, so I used a whole-wheat penne. Sorry for the lack of amounts. I just sort of winged it and of course made it a lot more complicated than Averie's version.
Roasted Marinara
Ingredients:
Cherry tomatoes, halved
2 gloves garlic
1 tsp olive oil
dash sea salt
Carrots, diced
Roasted red bell pepper
Artichokes
To taste: basil, oregano, parsley, salt, pepper, red pepper flakes
Directions:
Preheat oven to 375. Place tomato halves and garlic on baking sheet and toss with olive oil and salt. Bake until tomatoes are just starting to get soft.
In food processor, combine all ingredients and puree to desired consistency.
Serve over whole-wheat pasta of your choice or zucchini or eggplant "noodles." I cooked up some lentils and spiced them with salt, pepper, garlic, and parsley for my protein. You could use whatever protein you liked, even just tossing with chickpeas would be great. 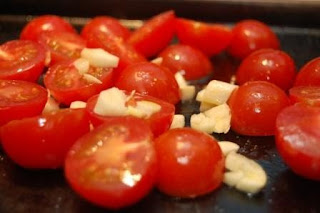 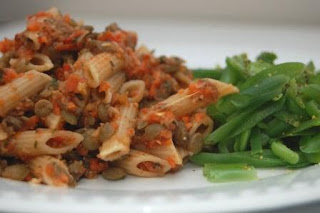 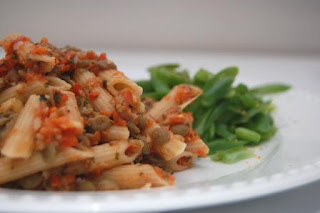 I will say that this sauce was fantastic. It would be super used as a topping for a veggie burger even for bruschetta. Capers would be another good addition to this sauce. It's a winner!