By Heather Iacobacci-Miller March 09, 2010
Tuesday Cardio
I came very close to not doing my workout this morning. I woke up around 4:55 (alarm set for 5:15) and my legs felt so tight. I really contemplated taking a rest day. I turned off the alarm and rolled over. What felt like close to an hour later, I checked the clock and it was only 5:20. Ugh. Ok, that had to be a sign to just get up and get it done. So I did. I chose Cathe's Step Blast (again). It's a little less leg intensive than some of the intervals or HIIT workouts. I did feel better after, but my legs are still tight.
After days of sunshine, it rained last night and was gloomy out today. The sun did try to come out here and there. Thankfully it was still warm, but it's amazing how much the sunshine (or lack thereof) can affect the mood. While I felt energized yesterday, I was less than energized today. Time seemed to drag a little, which made for a tiring day. Or maybe that was just getting up and exercising at 5:30...
I still feel like I'm a lost child about a good weight rotation. I need something that will keep my motivated and making gains. Something that will force me to steadily push myself. This week I'll stick with the pyramid-style of lifting. But I don't know if I should switch that up somehow for next week or find another split to do. The pyramid workout that Cathe has set up does upper body as supersets. I thought about maybe trying them as straight sets next week and splitting out into two upper body workouts. I'm probably over-thinking as usual. I'm open for suggestions.
Tuesday Quesadillas and Protein Bar Recipes
Dinner tonight was Spinach, Mushroom, and Cannellini Quesadillas.
Spinach, Mushroom and Cannellini Quesadillas
Ingredients:
1 can cannellini beans, rinsed and drained
1/2 white onion, thinly sliced
1/2 red bell pepper, thinly sliced
1 tbsp minced garlic
Fresh baby spinach (as much as you like or don't like)
3 baby portobellos, thinly sliced (because that's all I had)
Dried shiitake mushrooms reconstituted (or use all portobello)
Spices to taste: sea salt, black pepper, cumin, red pepper, red chili flakes, nutmeg
Shredded cheese of your choice (vegan or non-vegan)
Whole-wheat flour tortillas (check ingredients for vegan/vegetarian needs)
Directions:
In sauce pan, saute onions, peppers, mushrooms, and garlic in small amount of extra-virgin olive oil until soft. Stir in beans and cook until heated, then mash gently. Stir in spinach and seasonings. Cook until spinach is just wilted.
Using a non-stick spray, coat a large skillet and lightly brown one side of tortilla wrap. Flip and sprinkle with cheese (optional) then put filling on half of the tortilla and fold over. Cook both sides until browned.
Serve with your favorite salsa and/or sour cream. Other options are pico de gallo and a cheeseless queso. 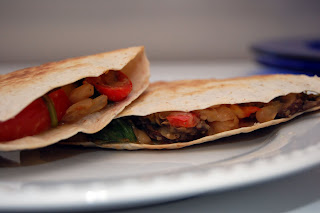 I also had time to make up a batch of Averie's Vegan No-Bake Peanut Butter Chocolate Chip Protein Bars. It's really a super simple recipe and completely versatile. She gives many options to choose from in as notes in her own version. I did make a few swaps, subtractions, and additions, so here's my version. But, please check out her original recipe! She has a fantastic blog (Love Veggies and Yoga) with tons of recipes to try!!
Averie's Vegan No-Bake Peanut Butter Protein Bars (My Way)
Ingredients:
1 ripe banana (and I think pumpkin would be fantastic)
2 cups oats
1/4 cup currants
1/4 cup white raisins
1/2 cup agave nectar
1/2 cup natural peanut butter
3 scoops vanilla protein powder
2 tbsp ground flax, plus 1 tsp seeds
2 tsp ground cinnamon
1 1/2 tsp vanilla extract
Directions:
In large bowl, mash up the banana, then add in all remaining ingredients and stir until everything is incorporated.
Press into 9x9 pan prepared with non-stick cooking spray or parchment paper. Put in the freezer for several hours to harden.
Cut into desired squares/rectangles and store in freezer. 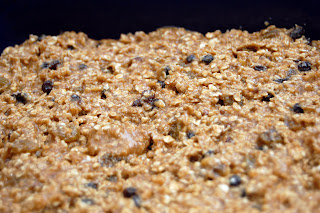 At the time of this post, they were not yet firm enough to cut and show you the full results. The taste, however, YUM.