By Heather Iacobacci-Miller April 04, 2010
Saturday Dinner Recap
Dinner was indeed a grilled affair. We made a Grilled Tempeh and Veggie Salad. We marinated the tempeh in balsamic and port wine vinegars. Grilled up asparagus, zucchini, yellow squash, portobellos, red onions, red and green bell peppers, and new potatoes. Piled it all on top of lettuce and spinach and drizzled with a balsamic vinaigrette. 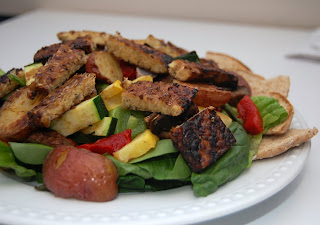 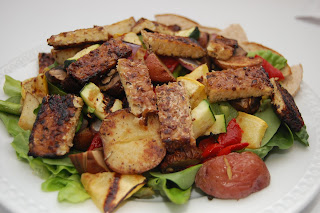 Weights and Longest Run
Today's workout was supposed to be upper body weights followed by plyo legs. However, Jason and I were planning on a run, so I thought it was probably wise to skip the plyo legs today. The workout was 3 sets of 8 reps as straight sets:
Shoulders - Upright rows
Biceps - Alternating curls
Chest - Incline DB chest press
Back - Pullovers
Biceps - Preacher curls
Triceps - Overhead extension
The weather was supposed to have been sunny today, but it ended up starting off very overcast. While I would have preferred another bright, sunny day, I suppose that the clouds kept the temps down for the run. Now, about that run. I had told Jason that I wanted to do a longer run. For me, that's usually 4.5 - 5 miles. I know, not really all that long in the grand scheme of running. But, for me, that's long. I didn't want to put any pressure on myself and say a set mileage. The deal was that we'd just run and take it as it went.
Today I logged my longest run ever at 6.2 miles. While it wasn't the fastest by any means (just under 54 minutes), it wasn't too shabby. Jason really did well pacing me down (I tend to just take off full speed ahead) so that I could do the longer run. For me it's not about the cardio, it's about my hip flexors and outer hips starting to hurt around mile 4. I don't know if this is a conditioning issue that I can overcome, or if it's something more physiological. So Kelly @ Healthy Living with Kelly - I held up my promise to run for you. Not 10 miles granted LOL.
We brought along a picnic lunch to eat (devour) after the run. I had made plenty of hummus and Carrot & Cabbage Salad so I just made wraps again and brought along some apples as well. It was a nice finish to a good run.
After our run, we made a stop by Home Depot for some plants. We got some new hedges to put in front of the porch. I also picked up some red and yellow bell peppers and other plants for all of the containers I have in the back yard. Do you enjoy working in the yard?
Dinner tonight was a take on my Whole-Wheat Rotini with Creamy Lemon Sauce. Tonight I used whole-wheat penne and included asparagus in the pasta for a .
Spinach & Asparagus Pasta with Creamy Lemon Sauce
Ingredients:Spinach and Asparagus Pasta with Creamy Lemon Sauce
8 oz. whole-wheat penne(or pasta of your choice)

juice of one whole lemon

In large non-stick skillet, saute onions and garlic in small amount of olive oil until soft and translucent. Add in artichoke hearts.

Cook pasta according to package. Drain, but reserve some cooking liquid.

Meanwhile, in a food processor, blend the remaining ingredients except for nutritional yeast  and reserving half of the zest until smooth. Use pasta water, white wine, and/or soy milk to thin sauce if needed.

Combine pasta, sauce, spinach, into skillet with the onions and garlic. Add the nutritional yeast and re-season if needed. Let simmer on low until sauce is heated. Top with remaining zest and additional parsley and serve. 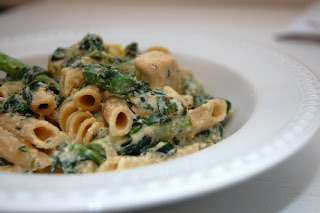 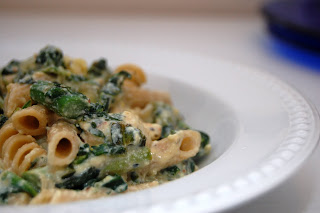 I will say that using the soft silken tofu actually works better for this. I only had the extra-firm though and it was really quite thick. I had to use wine to thin it out (darn).
I hope everyone has had a great weekend.