By Heather Iacobacci-Miller April 08, 2010
Thank You
First off, I definitely want to thank everyone for their kind words regarding yesterday's post about including more personal pictures. It really did feel kind of nice to receive compliments from you guys (not that I was fishing mind you). I'll try to be better about adding in a few here and there, but you will never see my face plastered on your screen days in a row! LOL. With that being said, some of those who admitted that they also could be posting a few more self-pics better not back out (ahem Jessica).
Rest Day
I decided to make today my rest day. My back is a little sore from kickboxing yesterday and my legs are still a bit sore from weights on Wednesday. I had thought Jason and I might run at lunch, but it's pretty windy out today and I just wasn't in the mood for a tough run. Tomorrow is supposed to be sunny, warmer, and less windy. So, tomorrow sounds more like a day meant for a lunchtime run.
Good Things on Thursday
I feel so far behind with errands and chores that I decided to work through lunch today so that I could leave early and get some things accomplished, namely a trip to the grocery stores (Kroger and Whole Foods) so that we could eat something other than a crazy concoction that may or may not end up edible. Plus, it makes for two fewer weekend errand, which translates to more time to enjoy the weekend.
I have sooo much good news to report this afternoon. For most this will not mean much, but I managed to get myself registered for Cathe's Annual Road Trip at her studio in New Jersey. There were only 105 slots and I am #90. Registration opened promptly at 2 pm and I believe it was filled in about 10 minutes perhaps.
Thank you Jessica for twisting my arm on this one. Not only will I get to meet Cathe and other "Catheletes," I will get to meet Jessica and her sister Jolene. This also brings me to a post that Jessica wrote today "Fitness brings people together." This is so true. Without her fitness blog and my fitness/food blog, we may never have become friends. Through her, I have met her sister now. I totally agree with Jessica's post, but I also think that food is something that can bring people together as well. Lucky for me, my blog is about both. I have "met" some super inspirational friends both via fitness and food. So to anyone who thinks blogging is just daily journaling, think again.
So I was walking on cloud 9, finished two errands for the week, enjoying the sunshine. What could be better? When I got home, there was a box sitting on the kitchen table addressed to me. Hmmm, I usually remember what I order. I couldn't think for the life of me what I would have ordered and totally forgotten about. To my absolute surprise (and joy) the box contained NuNaturals Stevia products. I apparently missed the fact that I had won the contest from Amie @ The Healthy Apple. My NuNaturals goody box contained a box of stevia packets, vanilla flavored stevia, and stevia baking blend. I am one happy girl. 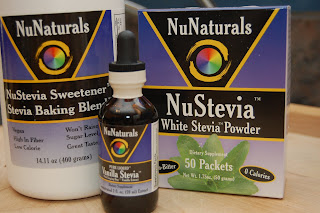 Thursday Dinner
Ok, now onto dinner. I picked up a package of Upton's Naturals Chorizo-Style Seitan this past weekend at my weekly Whole Foods trip. I wasn't exactly sure what I was going to do with it to be honest. It was definitely an impulse buy. I ended up making sort of a "Chorizo" Veggie Tex-Mex Rice.
"Chorizo" Veggie Tex-Mex Rice
Ingredients:
1 package Upton's Naturals Chorizo-Style Seitan (or veggie/vegan chorizo of your choice)
1/2 red and green bell pepper, chopped
1/4 red onion, chopped
1/2 package frozen Mexican-style veggies (corn, broccoli, cauliflower, red bell pepper)
1 can black beans, rinsed, drained
To taste: salt, pepper, chili powder, red pepper, cumin, cilantro, lemon juice
1 cup brown rice (uncooked)
2 cups water or broth
Directions:
Cook rice according to package directions.
Meanwhile, in large skillet, saute onions and bell peppers for a couple of minutes. Then add in the chorizo-style seitan and continue to cook until begins to brown.
Stir in the remaining veggies and beans and re-season if needed.
Serve over your brown rice (or you can just mix it all together). 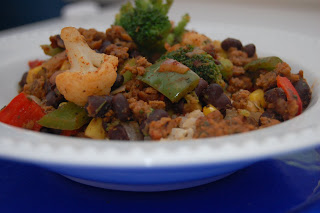 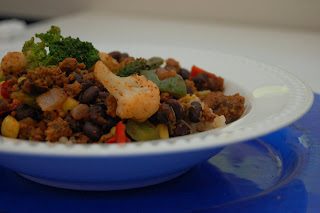 This was a fairly hearty dish actually. The "chorizo" was not very spicy (for my tastes) so I did feel like I had to add a lot of extra spices for flavoring. But, that's not to say it was necessarily bad or that I'd never buy it again. It's also be really good in wraps.