By Heather Iacobacci-Miller April 24, 2010
No Surprise - Pizza Friday
Well, it should come as no surprise that Friday's dinner was indeed pizza. It's just so easy to get the dough started while we play a few rounds of pool and relax a bit. In other words, it really is an easy dinner. As per the norm, I stuck with the Greek-style toppings for my half. Jason's half was sauteed green and red bell peppers, yellow onion, and soyrizzo with a Mexican blend 2% cheese. Sorry, I totally failed at taking pictures. But, if you're really needing a pizza picture fix, you can go back to previous Saturday posts ;-)
Supersets and Kickboxing
This morning I let myself be lazy. I actually slept in until 9am! That may as well be noon in my book. Of course, it was dark and rainy, so that helped...helped with the laziness I should say. I made steel cut oats with ground flax seed, cinnamon apples and peanut butter for Jason and myself. It's such a filling breakfast that I, of course, had to let it settle before I could start my workouts.
Today was Day 1 of Week 4 of my 8-week rotation. I can't believe this is the start of the fourth wee already! Today's workout was 4 sets of 5 reps done as supersets and increasing the weight:
SS#1

Back - Double arm rows
Chest - Flat bench dumbbell press
SS#2
Legs - Squats
Hamstrings - Deadlifts
SS#3
Biceps - Alternating curls
Triceps - Close grip dumbbell press
SS#4
Legs - Step ups
Shoulders - Shoulder press (was supposed to have been lat raises but I goofed)
I also added in 4 sets of 10 plie squats.
After weights, I did Shock Cardio MMA Kickboxing. This workout really has a certain fun factor to it. There's just something fun about punching and kicking.
After the workout, I devoured a yogurt mess. Since I failed on pizza pics, I thought I'd make up for it with a picture of this yummy bowl of goodness: Greek yogurt, strawberries, and Kashi GoLean Crunch Honey Almond Flax. MMMMMM 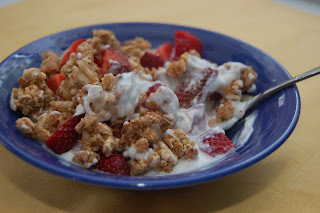 Super Saturday
Thankfully, the storms ended up moving out by noon. It turned out to be a super sunny, gorgeous day, though extremely windy. We had errands to run, pretty typical Saturday. We did check out new local grocery store - The Argenta Market. We are so excited to have this store in the area. They stock locally grown, organic goods as well as typical grocery store items just on a smaller scale of course. What's great, for me especially, is they do carry many vegetarian items. They also have a deli area with fresh salads, sandwiches, cheeses, meats, etc. The prices were surprisingly good to be quite honest. In fact, some things were several dollars cheaper than Whole Foods or even Kroger. I think one of the best things though is that they do carry locally grown and made goods. I think it's so important to support local farmers and entrepreneurs selling their sauces, salsas, etc.
We managed to make 2 out of 3 of the scheduled errand stops today. I call that a success. We hit up Whole Foods and Target, but opted for picking up enough for dinner from the local market rather than going to Kroger. I was getting so hungry that I was getting a severe headache and sick to my stomach. Not good. I am usually very good about not letting myself ever get that hungry. We ended up having a very late lunch at a restaurant that we basically go to for the patio dining. I had a large garden salad with zucchini, olives, mushrooms, tomatoes, and bell peppers.
Because we ate lunch so incredibly late, I won't be posting dinner. I am not sure what time we'll end up eating to be quite honest. However, I do know what's on the menu: Grilled Salad with homemade cibatta bread on the side. I bought some fingerling potatoes at the local market along with locally grown spinach. The salad will also have squash, zucchini, red bell peppers, and portobello mushrooms. I promise to take pictures and share with you all tomorrow.
I hope that everyone is having a great weekend!