By Heather Iacobacci-Miller April 20, 2010
2 on Tuesday
Last night I set the alarm for 5:22 am (I have an issue with setting it at odd times like 2 mins extra sleep makes a difference) so that I could get up and do 30 minutes of kickboxing and abs. For once, I only woke up one time during the night and was snoozing hard when the alarm started going off. I thought I could quickly reset it and go right back to sleep. The stupid thing would shut off though. At first I thought I was hitting the wrong buttons, but I wasn't. I simply would not turn off. It does really quirky things from time-to-time when I try to set it (it was a cheapo purchase). But it's never not turned off. So, needless to say, I did indeed get up after all. I ended up doing 35 minutes of Kick, Punch, and Crunch plus stability balls abs.
Jason and I had planned on a lunchtime run today as the weather was supposed to be nice. He was complaining about a bad crick in his neck though, so I wasn't sure the run was going to happen. But, he said he'd give it a shot. I assumed we'd end up doing a slower, easy run. Instead we rocked out 3.1 miles in 23:45. That's more than 30 seconds off my PR of 24:18 at a race in May last year. I know for some that's not anything to write home about, but for me, that's huge. As an asthmatic, there was a time when I couldn't even run 1/2 a mile let alone 3 miles period. Anyway, hopefully I'll be able to shave off just a wee bit more time at the race in a few weeks. We'll see. I have a bad habit of starting off way too fast then freaking out and overcompensating and slowing down too much by the 3rd mile.
Are you good at pacing yourself or do you get caught up in the race hype?
More Grilling
Tonight was a perfect night for grilling. Jason bought some gigantic portobello mushrooms and they were calling to be used. Dinner had sort of a Greek flair in terms of flavors: Grilled Stuffed Portobellos with Sundried Tomato Chickpea Quinoa.
There really isn't much of a recipe for the mushrooms. I marinated them in balsamic vinegar, minced garlic, and rosemary. Grill them inside down first then flipped them over and filled them with fresh spinach, roasted red bell peppers, and goat cheese.
Sundried Tomato Chickpea Quinoa
Ingredients:
1 cup dried quinoa
2 cups water or vegetable broth
2 tbsp dried shallots (or fresh)
Sundried tomatoes, however much you like (reconstituted)
1 can chickpeas, rinsed, drained
To taste: salt, pepper, parsley, lemon juice
Directions:
Cook quinoa according to package seasoning with salt, pepper, shallots during cooking. Once cooked, stir in remaining ingredients re-seasoning as needed. 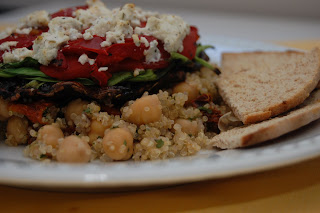 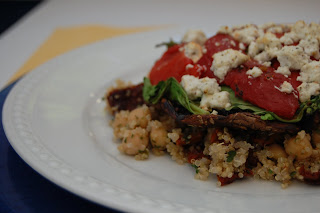 The Sundried Tomato Chickpea Quinoa turned out really great. It would be a great, light salad if you added in spinach as well, artichokes would be great too.