By Heather Iacobacci-Miller April 29, 2010
My How You've Grown
It's so true that time flies when you're having fun. And time has flown by with my blogging. Exactly 6 months ago I published my first official blog post: Let Me Introduce the Blog.

I don't want to make a whole post of my 6 month anniversary, but I thought it might be fun to reintroduce myself and do just a brief recap:

"About Me"
So what's up with the title? My husband jokes with me about my biceps since I started working out. I protest saying you can't see them unless I flex. His response: Where's the Beach [flex] The Beach is This Way. So my blog is about getting fit, staying fit, and hitting the beach! My goal is to inspire others to workout and get into shape. I am also passionate about food. I am vegetarian, but I love to cook and try out new recipes. One goal is to show that just because a recipe is vegetarian or vegan, doesn't mean that a meat-eater won't enjoy it. It's far more than lettuce and sprouts.

Reflection
I seriously had no idea what to expect when I started blogging. I was using my blog as a journal basically. I had intentions of trying to inspire others somehow, to show people that vegetarian and vegan foods can be tasty whether you're a meat-eater or not. My original posts were rather random as I look back now. I had made up a list of topics and ideas I thought I wanted to "cover" and would work from that list. The thought of that is rather funny now. The list got tossed after about 2 weeks actually. When I first started, I was afraid that 2-3 posts per week would be too much. Boy did that change! I started searching around for blogs that inspired me and slowly began to come into my own as a blogger. I found a natural style that seemed to work. But how did others like it? I wasn't even sure people were reading my blog. I was giddy over my first comment...posted by my sister. Four posts later I did finally get 2 comments, then another 5 comments and I met Jessica @ EatDrinkBreatheSweat. It was so nice getting a comment that was really meaningful to my post.

In 6 short months, I have "met" some amazing and inspiring friends. I have learned more and been inspired more than I ever thought possible. While my intentions were to inspire, I have been the one to be inspired by fellow bloggers. I truly appreciate everyone's comments and everyone who takes the time to read my posts (even if they don't comment). It's so well worth the work!!!


Running and Lifting
Today I felt much more energized after my rest day. I was really ready to get back into action. At lunch Jason and I did some running drills rather than just run the typical 3+ miles. Sometimes that can get very mundane - running the same route over and over....and over again. Plus, it's fun to shake up the workouts from time-to-time. We warmed up with a 1.5 mile run heading over to a park where we did 7 sets of Stride Drills then ran back home. Those drills made me realize just how weak my hamstrings are. No matter how many deadlifts I do, I apparently need to do more (and more drills).

After work I hit the weights. I was feeling so much stronger after take the much-needed day off. The workout didn't have the dread factor that it had previously. Not to say I was exactly excited to do 3 sets of 15 reps. But, I did it. The exercises were done as supersets with the goal of increasing my weights 1.25-2% over last week.

SS#4
Legs - Static lunges/Split lunges
Shoulders - Upright rows
Overall, it was a great workout. I felt strong and was able to go up with all of my weights. Gotta love those strong days! After the weights, I pampered myself a bit by taking a soak in an Epsom salt bath.

Dining
I decided to make things easy on myself for dinner by going with leftovers plus. I decided to cook the Barley Black Bean and Lentil Loaf just a little bit longer to see if it would firm up more. Since the weather was so nice, and we have rain on the way, I decided to grill everything. I know, sounds funny grilling lentil loaf. But I cut it into "slabs" and put it on the same baking sheet as fingerling potatoes, which I seasoned with thyme, rosemary, salt and pepper. I also grilled asparagus and seasoned with a lemon pepper spice blend. 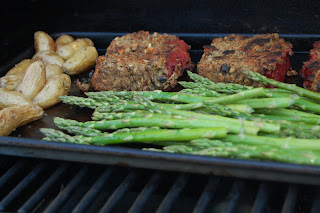 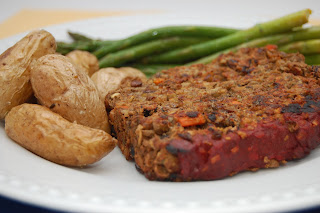 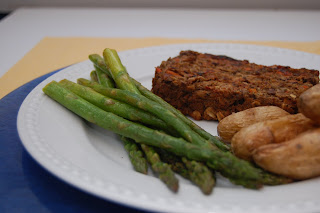 Sometimes leftovers can seem like so much more. This turned out great and didn't feel at all like just a re-heated meal.

So what's the oddest thing you've put on the grill?