By Heather Iacobacci-Miller April 15, 2010
Taking the Rest Day is Sometimes Tough
Today ended up being my rest day. However, I was really itching to run during lunch. I typically allow myself to enjoy a rest day with no thoughts of exercising. Today was really different though. I so was not in the mood for a rest day for a change. So I kept arguing with myself about whether or not I should figure out how to squeeze in a workout.
Anyway, I think a big part of that was wanting/needing to warm up. They keep our building frigid. All I want to do during the summer is just go stand outside in the direct sunshine or, better yet, go sit in a sizzling car. It just strikes me as such an enormous waste of energy and money when buildings are kept so incredibly cool. Yes, I'll admit, I am typically colder than most people. However, when even the men are walking around in coats, Houston, We Have A Problem.
Too Much to Do
I had a ton of errands that had to be run after work today. I worked through lunch so I could leave early and try to avoid as much rush hour traffic as possible. I had items to return and items to purchase, which made for one long errands to run list. I totally have to plan it all out in my head before heading out for multiple errands. Which stop first for the easiest exit to get to the next stop, down the line. Oh and then I have to factor in whether or not there may be perishable items as well.
Do you plan and plot out your errands or just take off?
Thai Thursday
After talking about Pizza Friday and Mexican Monday (which I missed the boat on this week), my friend Alicia and I were joking the other day about a Thai Thursday. I was thinking that Jason would likely want to grill out and eat outside as the weather is still nice. I really wasn't much in the cooking mood earlier in the day, really uninspired. I guess I was dreading the errands and was resolving myself to veggie burgers with sweet potatoes (not that I don't mind that of course). Also, there were so many things that I wanted to make. Can't make it all for one meal though right? Oh wrong! First off, there won't be a Pizza Friday tomorrow as we'll be going to see a baseball game and won't be home for dinner. So, how does one fit in the must-have pizza fix for the week, grilling, and Thai Thursday? How about a Grilled Thai Tofu Pizza.
You can either use a pre-made crust, dough, or make your own. I used my Wheat Pizza Dough recipe (subbing all-purpose flour with whole-wheat pastry flour).
Grilled Thai Tofu Pizza
Ingredients:
1 can lite coconut milk
1/2 cup creamy natural peanut butter
2-6 tbsp red curry paste (completely depends on how much heat you like)
1tbsp hoisin sauce
1 package extra-firm tofu, cubed (frozen, thawed, squeezed)
2 carrots, thinly sliced
2 green onions, chopped
broccoli and cauliflower, bite-sized pieces
Shredded mozzarella (vegan or regular)
Directions:
Prepare sauce by combining coconut milk, peanut butter, curry paste and agave in sauce pan. Let simmer until begins to thicken.
Take some of the sauce and toss with cubed tofu until just coated. Using a vegetable basket for the grill, grill the tofu until it begins to crisp on the outside or bake in the oven.
Spray grill with non-stick spray for grills and place pizza crust on grill for just a few minutes until it begins to lightly brown then flip.
Once very lightly brown on both sides, spread out the peanut curry sauce and add on the toppings.
Return to grill until bottom is golden and cheese has melted. 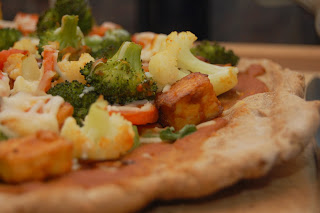 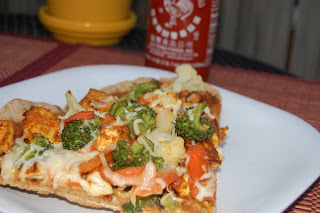 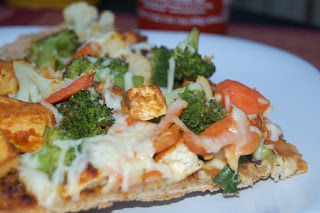 I must say that this turned out so well. Rather than using our typical chipotle chili flakes, we drizzled with Sriracha hot sauce for a bit of a kick. I had meant to use oyster mushrooms, but completely forgot. I think mushrooms would be a great addition. Grilling the pizza makes it much crisper than baking. this is definitely a thin crust type of pizza option rather than thick crust. Also, the sauce recipe may far more than needed for marinating the tofu and as the pizza sauce. You could probably half the recipe. Or, save like I did and it'll be used for a quick lunch.