By Heather Iacobacci-Miller April 13, 2010
Dressing Up and Dressing Down
I really must comment as a whole on your comments from yesterday's post about going without makeup for a day or weekend. It's interesting that some find it a luxury to get to go without because it's so rare, and then others look forward to getting dolled up for the same rarity factor. It does sound like the consensus is that it's always fun to get dolled up and be a little bit girly, but it's also nice to occasionally not care. I guess it's all about perspective isn't it?!
Two on Tuesday
Speaking of perspectives...my personal perspective on morning workouts is that they're still no fun. Jason and I decided to run this morning as he was going to do weights at lunch. Also, it's starting to warm up quite a bit by lunch these days. It was still completely dark and about 55 degrees when we stepped out at 5:45 this morning. I felt rather disoriented for the first mile or so to be completely honest. We live in a historical district with sidewalks that leave a lot to be desired. It's one thing to run on the uneven surface during the day when you can see the sidewalk jumping out at you, it's another thing entirely when it's dark.
So, we opted to run in the street. It took me longer to hit my stride this morning. In fact, the first lap (1.5 miles) was just downright slow! It wasn't that it was a sucky run, I just wasn't functioning just yet. My legs were confused. I should have still been in bed! We did pick up the pace for the 2nd lap though. Jason had to drop off as we passed the house so I kept on for a mini-lap. I probably did about 3.5 miles this morning then abs and a stretch.
On cardio days, I typically aim for 50 - 60 minutes of cardio. I have gotten to where I really don't want to do one activity for more than 30 minutes though. So, today I decided to do the run in the morning then do a less intense 30 minutes of kickboxing at lunch. I chose kickboxing (Cathe's Kick Punch and Crunch and just did certain combos and drills rather than a premix) because it is so great for the core as well. It was really nice getting in 60 minutes of cardio, but in different forms and at different times. For me it seems so much less daunting and I can do multiple things I enjoy without burning myself out.
How do you feel about splitting up the cardio (or workouts in general)?
More Grilling
Today was another gorgeous day, perfect for more grilling. After being inside all day, it's really hard to pass up the opportunity to make dinner outside. Tonight's dinner is inspired by a recent post by Alicia. The squash in the post is very similar to a pasta dish I make. Tonight, however, I thought I'd change things up and grill the veggies and use up some of the extra barley I made for last night's dish. I decided to use a foil packet grilling method for a Foil Wrapped Grilled Squash with Barley.
Foil Wrapped Grilled Squash
Ingredients:
1 zucchini, large dice
1 yellow squash, large dice
1/2 white onion, medium slice
1/2 red bell pepper, medium slice
1/2 green bell pepper, medium slice
1 can chickpeas, rinsed and drained
1/2 can artichokes (in water), drained and patted dry
Capers (to your liking)
Splash white wine
Aluminum foil
To taste: salt, pepper, parsley, thyme, rosemary, minced garlic
Cooked barley
Directions:
Combine all ingredients minus the wine then divide out into half or thirds depending on the size of the foil packets you wish to cook or the number of servings you wish to make.
Pull out a square of foil (grilling foil works best) and spray one side with non-stick spray. Pile veggies in center and add splash of white wine (olive oil is optional). Fold in the sides to create a sealed packet. 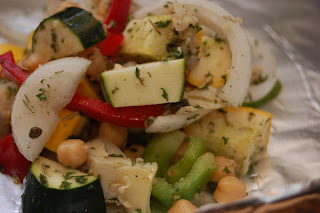 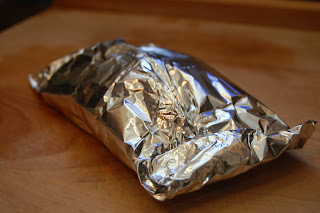 Place packets on the grill and cook until veggies are tender. Serve as a side or over barley, pasta, or rice to create a meal. 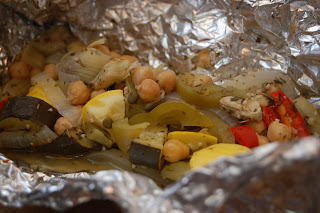 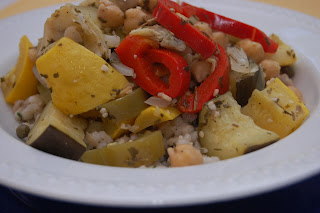 This dish turned out very well. It was still a light feeling meal for a warm evening. Jason did ask if I had added in sweet potatoes because he thought it was reminiscent of a Moroccan stew that I've made. So, that could be another option and it would take the flavors in a whole other direction. I did spice up the barley by adding just a splash of white wine, champagne vinegar, parsley, thyme, and rosemary.