What Happened to My Motivation on Mexican Monday?

By Heather Iacobacci-Miller April 26, 2010
Unmotivated on Monday
I had the hardest time peeling myself out of bed this morning. Jason got up to go swim at 5 am and there was just no way I was getting up. I fell back to sleep almost immediately in fact. I feel like I'm getting a cold or allergy crud so maybe that's the reason for the sluggishness.
Today was supposed to be Upper + Plyo. The upper body exercises were done as supersets of 4 sets of 8 reps.
SS#1
Chest - Flat bench flyes (supposed to have been incline but I goofed)
Back - Dumbbell pullover
SS#2
Shoulder - Arnold press
Shoulder - Lateral raises
SS#3
Biceps - Incline curls
Triceps - Overhead extension
SS#4
Split squats (added this in lieu of plyo, see reason below)
Donkey kicks (with 8# DB)
Early on in the day, I knew that I wasn't feeling just super energized. I wanted to go ahead and get the weights done before I somehow actually talked myself out of them entirely. Yes, I was seriously feeling that unmotivated. I sort of made a deal with myself, do the weights at lunch, add on a leg exercise, and forgo plyo. Rather than plyo, I opted for a fun-factor type of cardio instead (done after work). I just wasn't feeling up to a high-intensity workout to be quite honest. So I decided to listen to my body and do something that I knew I'd enjoy rather than force myself to do something I was going to grumble through. So, I chose a shorter premix from Cathe's Step Blast.
Mexican Monday
To take a lot of guess work out of dinner tonight, I opted for the Mexican Monday theme. While there are still a ton of options to choose from (quesadillas vs burritos vs taco salad), it certainly narrowed down the overall "what to make" list to something more manageable. The next factor was the "ease of making" factor. Very important when you're less than motivated on a Monday evening. I had thought about doing "Chorizo" Stuffed Poblano Peppers as I found some monster-sized poblanos the other day.
However, Jason was seriously wanting to try these tamales he picked up at Whole Foods. Ok, they're frozen, and pretty much ready to go other than making sides. The ease factor totally won today.The tamales were by White Mountain (they have 3 flavors, we just got the one marked "Vegetarian") and were completely vegan but not gluten free.
I made a Spicy Black Bean Barley to be used as the bed for the tamales. On the side, we had zucchini, red and green bell peppers and onions that we sauteed with lemon juice, cilantro, cumin, chili powder, red pepper, salt and pepper.
Spicy Black Bean Barley
Ingredients:
dried barley
water or vegetable broth
1 can diced tomatoes, well drained
1 can black beans, rinsed, drained
1 jalapeno, minced
2 tbsp minced garlic
2-3 green onions
To taste: salt, pepper, cumin, red pepper, chili powder, cilantro, lime juice
Directions:
Cook barley according to package directions. Once cooked, stir in remaining ingredients and cook until heated through. 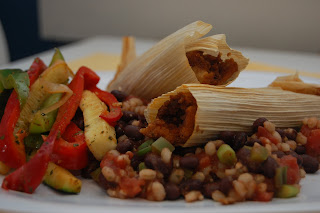 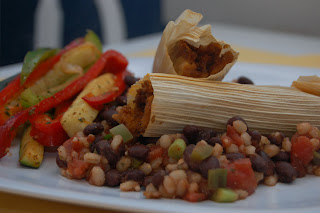 In all honesty, I can't recall that I ever tried a tamale as a meat eater. So I really don't have much to go on for comparison. I will say that these were really quite good. I may try my hand at making my own tamales now.