By Heather Iacobacci-Miller May 10, 2010
Upper + Plyo
Today was another cold, dreary day here. Where has summer gone? I ended up not going into work actually. Since the race, I have been battling sinus issues and trying to keep it out of my chest. My lungs still feel really shredded up too. I've been taking sinus meds, but they don't seem to be doing their job. I did decide to go ahead with my planned workout. It's upper plus plyo. The upper part was 2 sets of 8 reps done as supersets:

Plyo: Explosive running man on 12" step
I also did Shock Cardio HIIT Pyramid to complete the plyo part of this workout. It was quite close to a puke factor workout mostly because my sinuses and asthma issues. Definitely made if feel even harder than it was. In retrospect, I probably should not have attempted the plyo today. I was really hoping that the workout would give me that much-need oomph for the day.

Managing to be Productive
I always feel really bad for staying home. I don't know why, but it makes me feel like a lazy bum. I ended up mopping all of the downstairs (it's either hardwood or tile), vacuuming area rugs, finishing washing laundry and folding most of it, then baking Ciabatta Bread (you can see the original recipe here). Today I added 2 tsp ground flax and subbed 1 cup of whole-wheat pastry flour. It turned out great. I also tried a new recipe posted by Averie @ Loves Veggies and Yoga.

Averie's recipe for "Averies Vegan Pineapple Cream Cheeze". Averie noted that strawberries would be good. Since I had fresh strawberries from the farmers' market, that's the flavor I went with. This is the recipe as written. My changes are noted in italics)

Averie's Vegan Strawberry Pineapple Cheeze
Ingredients:
1 c of soaked raw cashews (soaked for at least 3+ Hours.  Drain & Rinse Well.  I use TJ's brand of cashews) (I halved the recipe, so used 1/2 cup)
2 Tbsp Agave or To Taste (can substitute a couple medjool dates but may need to add water/liquid as need for blend-ability) (halved so used 1 tbsp)
1/4 c Pineapple (you can also substitute blueberries, strawberries, peaches, any fruit you wish.  Pineapple has a high water content so may need to add a dash of water with other fruits) (I used strawberries and added a splash of unsweetened almond milk)
Optional:
Vanilla Extract (I used just a few drops of the liquid vanilla stevia)
Pinch of Cinnamon or Nutmeg (did not use)
1/4 Tsp Salt (I omitted salt)

Directions:
Combine all ingredients in food processor or blender and blend.

Mine was a little chunky still as my poor little blender just doesn't cut it for pureeing cashews. So I didn't take any pictures. I didn't think they would do the recipe justice. Either way, this is so tasty! It's definitely a keeper recipe!


Soup it Is
When Jason got home, he said he could smell the bread before he ever came in the door. So dinner needed to, somehow, include the fresh baked bread.  I thought a soup with a salad sounded good. I was thinking of a butternut squash type soup. He, however, was set on trying a soup he marked in The 30-Minute Vegan: Over 175 Quick, Delicious, and Healthy Recipes for Everyday Cooking

ages ago. It was Shiitake-Sea Veggie Chowder. I decided to take advantage of the opportunity and let him do the cooking. Since he pretty much followed the recipe, I won't post. But I did get pictures of course. 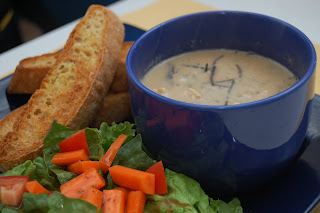 This will definitely be a recipe we try again. However, it does need some tweaks. There seemed to be a depth of flavor that was missing. Not really sure what it was, but Jason did add several additional spices and more than what was called for. Overall, it's a great start though.