By Heather Iacobacci-Miller May 03, 2010
Weights and Step
Today was a return back to a normal rep number for me - 2 sets of 8 reps. So that means HEAVY. No skimping or it's just not worth it when you're only doing 2 sets. I actually thought that I was wrong and that it should have been 3 sets, but nope, that's what the rotation called for.
Chest - Incline flyes
Back - Double arm rows
Shoulders - Military press
Triceps - Lying dumbbell extensions
Biceps - Incline curls
Biceps - Hammer curls
It was supposed to be paired with plyo work, but I thought Jason and I might be running after work. So I only did 3 plyo exercises using a 12" step.
In the end, we didn't run today. Jason sort of changed up his weight days, so tonight he was lifting. I was a little disappointed as it was a really pretty day. It's getting harder and harder for me to want to do cardio indoors.
I really didn't feel up to plyo to be honest, laziness taking hold, but I did opt for a an intense step workout that is made up of a short step combo followed by an intensity blast (similar to plyo). The one I went for was Cathe's Imax 3, which I actually had not done in ages. I only did about 35 minutes then followed it up with abs and a stretch.
Monster Poblano Peppers
Clearly it's Mexican Monday, so I went with Acorn Squash and Peppers Stuffed Poblano Peppers with Black Bean and Tomato Quinoa. I had 2 monster poblano peppers begging to be used up. How could I resist?
Black Bean and Tomato Quinoa
Ingredients:
1 cup quinoa
2 cups water or broth
1/4 red onion, minced
1 can no-salt tomatoes slightly drained
1 can black beans, rinsed and drained
1 small can diced green chile peppers
To tasted: salt, pepper, cumin, chili powder, cilantro, red pepper
Directions:
Prepare quinoa according to package but adding in the minced onions at beginning of cooking process. Once cooked, stir in tomatoes, green chile peppers, black beans, and spices.
Acorn Squash and Peppers Stuffed Poblano Peppers
Ingredients:
2 large or 3 medium poblano peppers (top removed, save & dice, and slit cut down side)
1/2 roasted acorn squash, cubed
1 jalapeno, minced
1 tbsp minced garlic
1/2 bag of red, green & yellow bell pepper and onion mix (thawed), and fresh would be ideal
To tasted: salt, pepper, cumin, chili powder, cilantro
Shredded 2% mixed Mexican cheese or vegan cheese (optional)
Directions:
Preheat oven to 425. Place poblanos in casserole dish, cover, and pre-bake approximately 15 minutes until just barely soft.
In large, non-stick skillet, saute jalapeno, the tops of the poblanos, bell peppers, onion and garlic. Season with all spices except red pepper. When peppers are soft, stir in the acorn squash and cook until just heated.
Remove the peppers from dish, pour the quinoa mixture into casserole dish. Place the peppers on top of the quinoa and stuff with pepper mixture. Top with grated cheese (optional).
Return to oven and bake another 15 minutes, until cheese is melted. 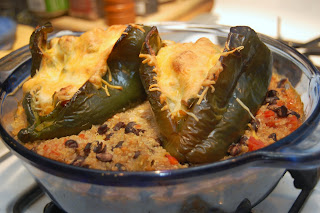 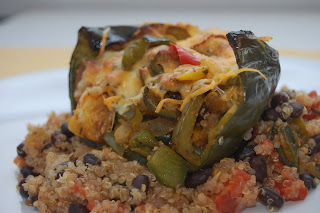 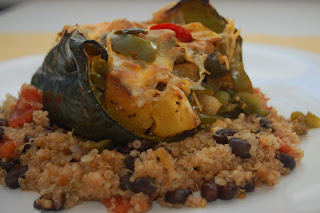 The slight sweetness from the acorn squash paired so well with the spicy peppers (thought they weren't overly hot). It was a nice contrast. This quinoa would be great as a side or even in a wrap.