By Heather Iacobacci-Miller May 08, 2010
Race Recap
I love that you guys take the time to share a fun fact or two as well. I love getting to know you better! Now, about that race...The weather couldn't have been much better. It was cloudy, which meant it was cooler. The wind did kick up unfortunately. That felt great at the end of the race, but made for a few long, hard stretches running into it. We got to the race site right at 6 pm to pick up our packets and goody bags. I forgot to take pics of the bags - but they were recyclable bags from Whole Foods. They will get tons of use in our household.
Here are a pre-race picture of my sister and me. Isn't she too cute! 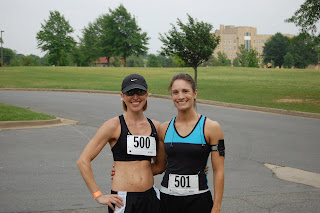 We warmed up with an easy run then a few drills just to get the legs moving and nerves out. The race started at 7 pm on the dot. I knew what I needed to hit at each mile marker. Mile 1 I hit at 7:20, I was feeling great but that was just too fast for me; I knew it but kept going. I was feeling great, like flying. It's really the best I've felt running in ages. So, I kept up my pace rather than slowing myself down. I hit Mile 2 at 15:26. Then it all came crashing down. I hit that proverbial wall. And I hit it hard! All the sudden my lungs were on fire to the point where I thought I may actually cry. Oh and puke, I wanted to puke too. But I think the lung thing was the worst.
I started to try to back off my speed, but my legs seemed to have a mind of their own. It was either go go go or stop. I couldn't come to a comfortable, slower pace for some reason. There was most definitely a lot of cursing going on and probably not so much under my breath to be honest. I was just getting so angry with myself because I had that race at one point.
After mile 2.5, I knew I was not going to make my goal, but when I got closer to the finish, I pushed it out as hard as I physically could without falling flat on my face. I passed person after person right up to the finish line. That part felt good, it felt great. Seeing my time totally made me want to kick myself though (had that been physically possible at that point mind you). So, no personal best. I made it in 24:20 and that earned me first place for my age division at least.
But, on a brighter side, my sister finished her first race at 32 minutes. I was so proud watching her come across that finish line, and I could see how proud she was of herself. So, I may not have made any records, but that's not really what it was about in the end, in all honesty. No, it was about enjoying that moment with my sister. It was about pushing myself mentally and physically. It was about getting out of comfort zones. The race was time spent with my husband and my sister and that matters far more than any race time. So I might be just a little disappointed, but I am not mad at myself now. The positives of the race outweigh any silly, trivial negative that I was bringing upon myself. 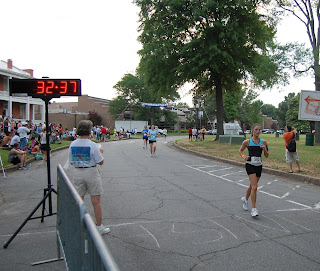 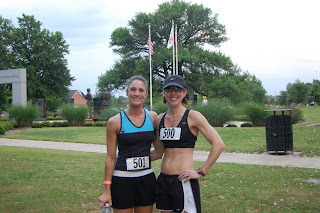 Sarah and me just after the race (still smiling oddly enough) 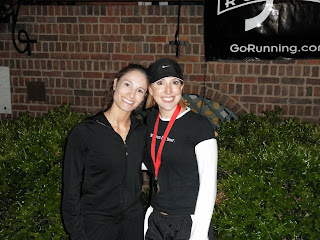 Sarah and me after I got my medal 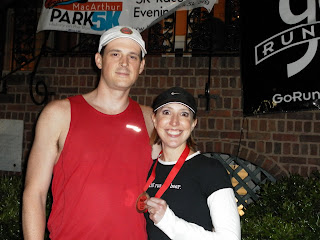 Jason and me after I got my medal
After the race there was free beer and pizza for the runners. I did enjoy a couple of beers, but no pizza. Even if it had been great pizza, I was still too puky feeling to eat anything. They had a band as well. It was a nice post-race party. We got home around 8:45 and decided to order pizza from the only place that delivers to our house, but that happens to have a great vegetarian pizza loaded with zucchini, bell peppers, tomatoes, and onions. We just chilled out and relaxed in our PJs before hitting the sack.
Super Reps Supersets
Today was a gorgeous, sunny day. Much cooler but very nice. We hit up the farmers' market for veggies then Kroger for the rest of the groceries. Tomorrow it'll be a Whole Foods day.
I did my weight workout much later than normal for a Saturday. It was kind of a nice change I suppose. Today was 2 sets of 18 reps done as supersets.
SS#1
Quads - Rear leg elevated lunges
Hamstrings - Deadlifts on bench
SS#2
Biceps - Hammer curls
Triceps - Overhead extension
SS#3
Chest - Flat bench dumbbell press
Back - Pullovers
SS#4
Inner thigh - Plie squats
Shoulders - Lateral raises
I did add on one more superset for legs: Squats and Calf raises.
After weights, I did a short kickboxing workout: Shock Cardio MMA Kickboxing followed by a stretch.
Patio Lounging
Once I was done with my workout, I decided to be lazy and enjoy a little patio lounging time. I sat out and read my new Vegetarian Times and a book I've been reading lately. It was so nice and relaxing. The perfect way to spend a Saturday in my opinion.
I have no idea what we'll be having for dinner. Jason has been busy doing yard work, so food has yet to be discussed. Possibly some grilling since we have a stash of new veggies.
I hope everyone is having a great weekend so far,