By Heather Iacobacci-Miller May 29, 2010
Rock-N-Friday Night
Jason and I had fun at the baseball game. It was warm, but not terrible. It cooled off nicely as the sun began to set. The park wasn't packed either as it was the opening night for Riverfest. I put the pizza dough in the bread machine and set the timer so that the dough would be ready for us when we got home. The Travs were losing terribly, so we left at the top of the 7th inning. It was just too sad to watch.

So, we still managed to have Pizza Friday. No surprise there though right? My half was the usual Greek style. Jason decided to use hot sauce and BBQ sauce mixed together for his "sauce" and topped with sauteed green bell peppers, onions, and mushrooms. We topped the whole pizza with the Daiya Mozzarella flavored vegan cheese. It looked like a cheesy, gooey mess. But it was soooo tasty. 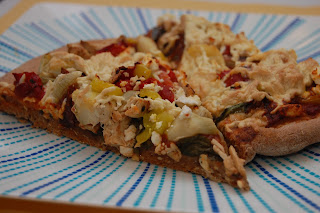 We started watching Couples Retreat. We weren't able to finish it because it was getting late and we needed to get to sleep since we needed to get up somewhat early for the race. It's a pretty good movie. It's definitely one that I'm glad we didn't see at the theater but rather waited to Netflix.

Rock-N-Stroll
Well, the race this morning started at 9 am. That meant that we didn't really have to get up super early for a Saturday. However, I was too nervous to sleep past 7 am. I pretty much woke up just before 6 and never went back to sleep. So I got up, had some Kashi cereal with 1/2 a banana and started drinking lots of water. The temps were already hovering at 70 degrees. I started to wish the race started at 8 instead.

We got there and did ran about 10 minutes to warm up. Of course I questioned my own sanity several time as we started to line up. Oh, I must do a quick caveat that costumes (especially rock costumes) were encouraged. So lined up with me was Slash, Axle Rose, and a Red Crayon. My mindset going into this race was not to set any personal records, but rather to try to pace myself better - something I am horrible about.

I hit mile 1 at 7:20 (same as the last race). I knew I needed to slow down just a bit, but not too much. I did well with that and hit mile 2 at 15:20 (better than the last race). I felt so much better throughout this entire race to be honest. I was pushing myself, but I didn't have the shredded lung sensation. It's not that it wasn't easy or that I wasn't going hard, I was, but something was clicking better. Better enough to set my own race PR with a time of 24:12, which was good enough for 2nd overall female.

I was very proud of myself and my time. However, I was annoyed to be passed by the Red Crayon. I mean seriously? He beat me wearing a full-length red felt crayon costume. Oh, and the girl who won first, well, she shouldn't count. Ok, she was wearing a cow costume, this was her 2nd (yes 2nd) race of the day, AND she is freaking training for the Olympics. Humph. 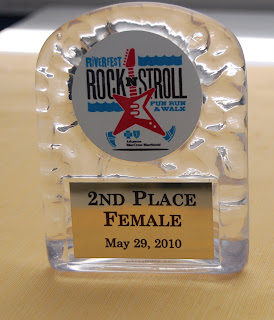 Post-race events were actually really nice. They had a band, food like pizza (no I didn't eat it), bananas, oranges (oh yum after a race), and a few freebies to snag up. Not a bad way to begin a Saturday.


Rock-N-Girls' Lunch
My mom and sister came up around noonish . I made lunch for us - a Squash & Chickpea Quinoa Salad. It was super easy to throw together. I mean, I did make it at 7:15 this morning before the race after all. It couldn't be anything terribly difficult!

Directions:
Cook quinoa according to package directions. I added in the shallots while cooking. After it was cooked, I added salt, pepper, dried fire roasted tomato flakes, and the tomato basil spice blend.

Saute onion until tender then add in the squash and garlic and season with salt and pepper. Cook until squash is just softening. 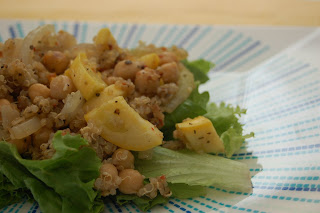 After lunch we headed over to the mall. What's a Girls' Day without a bit of shopping??? No serious damage was done, but we all did leave with a few new items. I'm wearing my new sandals as I type this (8 bucks thank you very much).

Rock-N-Patio Time
Jason was working diligently on getting our pool in order. I decided that a bit of patio lounging was a must-do for a Saturday on a long weekend. I sat out with a book and few magazines for a little over an hour. It was nice to sit and relax after a busy day. And as if the race, a girls' lunch, and patio time weren't enough for one day, we will also be going Riverfest to watch the Black Crows play. I'll be sure to do a recap of that tomorrow along with dinner. I have no idea what to make before we head out. I feel like I must do something on the grill. I think that's mandatory on Memorial Weekend.

I hope you all are having a fantastic Saturday!