By Heather Iacobacci-Miller May 30, 2010
Riverfest Recap
Last night really seemed like a grilling type of night - a must for Memorial Weekend. I grilled up some sweet and baking potato "fries" along with green bell pepper and onions and Tofurky Kielbasa. I didn't have any hot dog buns, so I ended up having to cut them in half and putting them on sandwich thins. I topped with spicy mustard, sauerkraut and the grilled bell peppers and onions. It hit the spot. 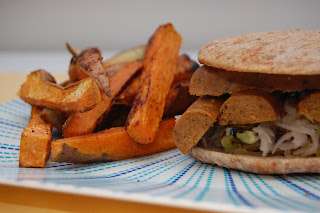 We had a sudden rain storm and were a bit worried about that as we were supposed to be heading down to Riverfest to see the Black Crows. Thankfully, it didn't mess up the grilling and it blew over very quickly. Even better, it cooled things down a bit. Around here, afternoon showers either make it steamy and unbearable or cool it down. Thankfully we got the cool down. We got down to Riverfest around 7-ish and headed directly over to the stage where the Black Crows would be playing. Gotta get your spot saved. We got to see a local band called Lucero. We'd never seen them before and were pleasantly impressed. 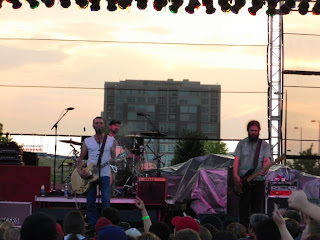 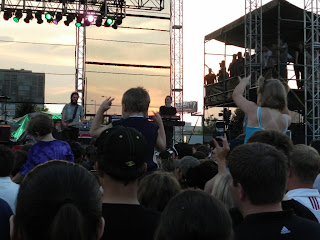 Notice the 2 kids with the "devil" fingers. They did that almost all night.

It felt like we were standing there forever, well, 2 hours might as well be forever after a 5K and no seats. They did start promptly at 9:30 and rocked out until 11. It was an awesome concert. We had such a great time. What's sort of sad, however, is that as I looked around, I realized that many of the teens dancing around me were likely not even born the last time I saw the band play! 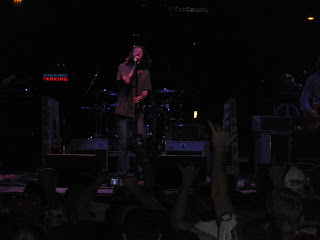 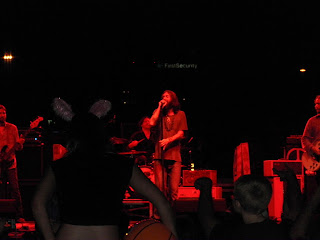 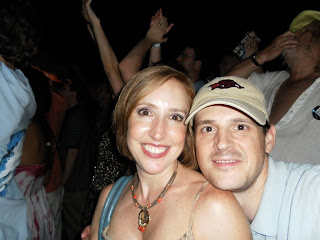 Pyramid and Kickboxing
Today we got up and ran a few errands: Home Depot and Whole Foods. I got in my workouts, of course. I decided to do Pyramid Upper Body today along with MMA Kickboxing then stability ball abs. My arm were shaking after the weights. Pyramid styles always sneak up on me. The concept is that you start at your lightest weight for 12 reps, increase weight for 10 reps, heaviest for 8, then back down the pyramid. Here are the exercises I did:

It was a good workout, and I'm sure I'll be feeling it tomorrow.

Funday Sunday
After the workouts, I did indulge a bit and sat out on the patio with my books and magazines. We felt that we should do some sort of traditional BBQ meal for Memorial Weekend at some point. So we decided that it should be today. I made a Vegan Potato Salad, Carrot & Cabbage Slaw (recipe here), Grilled Corn on the Cob, and Grilled BBQ Tempeh.

Directions:
Boil potatoes until just soft then drain and place back in pot to let remaining liquid cook off.

Combine all ingredients in large bowl and refrigerate. If you like heat, add a dash (or two) of red pepper. 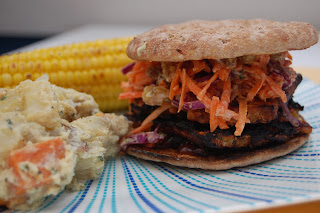 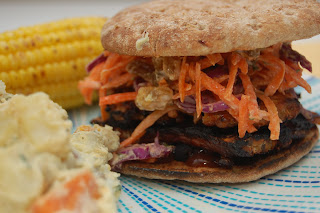 In all honesty, this potato salad would fool even the biggest mayo-lover!

Tonight we had some special VIP passes to watch the firework show (always done on the Sunday night of Riverfest) from the Peabody Hotel. I am not a big fireworks person, but Jason loves fireworks. The passes included free wine and dessert. I was most definitely going for the free wine - all about honesty. I'll be sure to post a recap of this event tomorrow.

Wow, this has been one super filled, super fun, rock-n-busy weekend so far. I honestly hope everyone is having a great weekend too!