By Heather Iacobacci-Miller May 25, 2010
Morning Run & Noon Lifting
Since it's gotten so hot and humid this week, Jason and I opted to go for a run this morning. We got up at about 5:40 then hit the pavement. It was muggy, but at least it wasn't sweltering. The temperature was already at 68 degrees though if that gives you an indication of how warm it is this week. We did a fairly easy run - it was still early and all. It was really nice to just be out moving.

I did go home and do my weights at lunch as it was Upper with Plyo. Since I had run, I only did 4 plyo moves. The weights were done in 3 sets of 8 rep as supersets:

It was a pretty good workout. I was able to increase the weights. I did hit failure with the hammer curls on 2 of the sets, but I maintained the heavier weight rather than dropping down.

Lazy = Leftovers
It was really nice not having anything to do in the way of workouts after work. I was able to go home and get some chores done, like laundry. Jason went and rode his bike after work, so he didn't get home until closer to 7. I just don't like eating dinner that late and was honestly being lazy. So I had some leftover "Creamy" Sundried Tomato & Veggie Pasta Salad over a bed of lettuce and spinach (just to change it up a little bit). I am typically not one to eat leftovers. But I seriously did not feel up to cooking. I decided to relax a little and do something girly like paint my nails (in between loads of laundry of course). 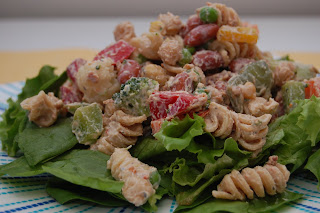