By Heather Iacobacci-Miller May 16, 2010
Easy Sunday Run
Today was sort of a lazy day. The weather seemed to be undecided about rain or no rain. Thankfully the rain held out until the later afternoon. I let myself stay in bed until about 8:45. Then I made a nice bowl of PB&J&B Oatmeal.
After that settled, Jason and I went for a very easy run. I am have severe pain in my extreme upper hamstring/low glute area. So we took it easy. It felt great to take it slow for a change. It would behoove me to do more slow, longer runs to be quite honest. After the run, I stretch for a really long time. I used to be so limber from ballet Not so anymore, even though I do stretch daily. It's just not the same.
Lounging and Recipe Testing
The sun actually popped out for a while. It was super humid, but the sun was out and I was going to be outside. I sat out on my lounge chair and read for about an hour. I really should have been doing chores mind you, but I was enjoying a very lazy Sunday instead. No guilt. I did end up making some dog treats and trying my hand at making seitan for the first time. It's something I have been wanting to make for ages, even bought the vital wheat gluten flour months ago. I just kept putting it off. Well, today I finally made it. It was either make seitan or do house cleaning.
I pulled the original recipe from Recipe Zaar as a starting point. It looked like an easy enough recipe that could be versatile, and it was. Here is my version as, I did make several changes to the spices and quantity of spices and seasonings used:
Basic Seitan
Ingredients:
2 cups vital wheat gluten flour
1 tbsp garlic powder
2 tsp ground thyme
Salt & pepper to taste
1 1/4 cups low-sodium vegetable broth
3 low-sodium soy sauce
Few dashes of liquid smoke
Simmering Broth
4 cups water or broth (I used about 2 1/2 cups broth and 1 1/2 water because I ran out of broth)
1/4 cup soy sauce
Liquid smoke (sorry, just added and didn't measure)
Parsley, garlic powder, thyme
Directions
Add garlic powder, salt, pepper, and thyme to flour and stir.
Mix liquids together and add to flour mixture all at once. Mix vigorously with a fork. When it forms a stiff dough knead it 10 to 15 times. (it forms a dough very quickly)
Let the dough rest 2 to 5 minutes, then knead it a few more times. It will be rubbery. Let it rest another 15 minutes then cut into chunks, strips, or patties.
Meanwhile, combine broth ingredients and bring to a boil. Drop in the seitan pieces, cover, and simmer 45 to 60 minutes. Let seitan cool in the broth. 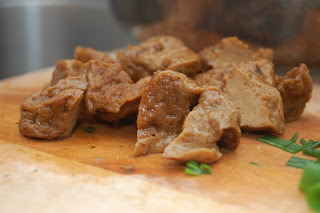 This was so easy, and I can't believe I had put it off for so long. I cut a variety of shape just to play around. I didn't realize that they would start to puff up as they cooked. I'll remember that the next time. I remembered Alicia @ Vegan Epicurean telling me that you must really be heavy-handed with seasonings as it can be potentially bland. I definitely added more seasonings than the original recipe, but I will add more the next time (both quantity and types of seasoning). I'm excited to play around with other flavors now and perhaps simmering broths as well.
When I decided to make the seitan, I wasn't necessarily planning ahead as to how to use it. I ended up using it in a veggie pasta dish that's super easy to throw together and very versatile in terms of the veggies that you can use.
Seitan Veggie Pasta
Ingredients:
7 oz whole-wheat rotini (or past of your choice)
Seitan
1/2 zucchini, cubed
1 yellow squash, cubed
1/2 red onion, diced
1/2 red bell pepper, diced
2-3 cloves garlic, minced
1 can no-salt diced tomatoes (with juice)
2 tbps tomato paste
2-3 green onions, diced
White wine (or use pasta water or vegetable broth)
To taste: salt, pepper, parsley, basil, oregano, chili pepper flakes, nutritional yeast flakes
Directions:
Cook pasta to al dente.
In large skillet, saute onions, peppers, garlic until soft. Add in tomatoes and spices and let simmer a few minutes. Add in seitan, zucchini and squash. Add wine (or liquid of choice) and tomato paste. Let simmer until begins to thicken. Add in the green onions and pasta. Turn off heat and toss until pasta is coated. 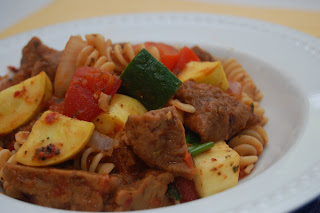 This is a really easy dish to make. I works great with a variety of veggies. It is also good with beans like chickpeas.