By Heather Iacobacci-Miller May 01, 2010
Pizza Friday
Last we made pizza (surprise huh?) and tried a new vegan "cheese" Daiya. I have heard that it's the best out there in terms of vegan cheeses. The last time we were at Whole Foods, I noticed that they had the "cheddar" flavor. I almost picked it up, but held off. When I stopped by after work yesterday, however, they had "mozzarella" flavor. Knowing I'd be making pizza, I just couldn't pass it up. It did melt much better than the last faux cheese I bought, and the flavor was really great. It tasted more like an aged mozzarella, so it was very flavorful. We will definitely be buying this brand now. I can't wait to try the cheddar flavor now. Jason will be very happy to be able to add "cheese" to his eggs, wraps, and such (dairy allergy). 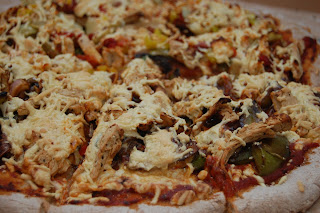 Oh, and thank you for sharing some fun facts about yourselves yesterday. I really enjoyed reading them!


Super Reps
This morning I took my time getting to the workout and made some PB&J&B oatmeal, caught up on blogs, that sort of thing. I was procrastinating because it was a super high rep set up: 2 sets of 18 (yes 18) reps.

I did add on 2 sets of 18 reps for calf raises and donkey kicks. After weights I opted for some kickboxing (Kick, Punch and Crunch). I did 3 combos and some drills. It was a great, sweaty workout.


Snacky Plate Saturday
Last night we had some major storms and tornadoes roll through the state. We were really lucky that the tornadoes skirted just south of where we live. This morning the rain lingered then we were left with heavy, gray skies until about 1:30 or so. I was pretty lazy with household chores. Just some laundry, minor dusting, and swiffering. When the sun popped out, I decided to head outside and soak up some sun for a bit. I also wanted to read the latest issues of Oxygen and Fitness Rx magazines that I picked up yesterday.

I have been wanting to try a few new recipes lately and also do a snacky plate (aka poopoo platter) for dinner after reading several posts on snack plates for dinner. It's something that Jason and I used to do a lot but have not done in ages. Yesterday I picked up some grape leaves. I have been wanting to try to make dolmas. I also had a recipe for Mushroom Ceviche that I wanted to try. I couldn't find the recipe again, so I sort of made it up based on various ceviche (vegan and non-vegan) recipes I found. I did the same for the dolmas as well.

Meanwhile, rinse grape leaves well in warm water and drain and cut off any large stems.

Most recipes said to prepare a stock pot by placing an inverted plate on the bottom to protect the dolma from direct heat. I actually had a steamer rack that fit in the bottom of my pot.

Place about 1 teaspoon of the mixture center of leaf, fold in right and left sides, then roll the leaf until you have a tiny 'cigar'. Place the dolmas in the pot stacking them as you go.

Add about just enough water to reach the bottom of the first layer of dolma, then cover and simmer for 30-45 minutes or until the rice inside the dolma is totally cooked. Check water level often.

Directions:
Mix all ingredients in large bowl. Cover and refrigerate at least one hour.

Along with the Lentil Dolmas and Mushroom Ceviche, I made Greek Wrap Pinwheels (whole-grain wrap with a garlicky hummus I made, sundried tomatoes, artichokes, spinach, feta). I also made some tortilla crisps for the ceviche by cutting whole-grain tortillas into strips, spraying with non-stick spray and seasoning them, then baking until crisp. 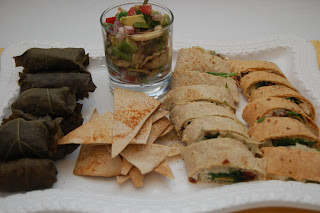 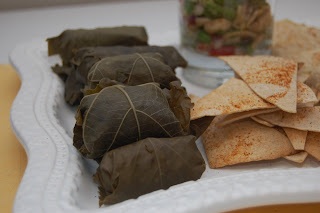 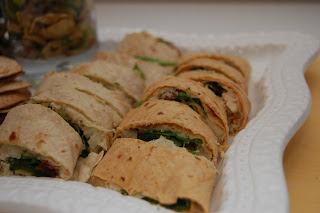 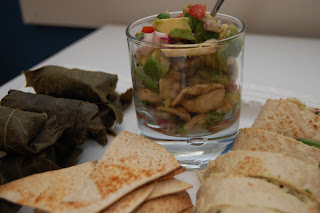 Let me just start off with my favorite, the Lentil Dolmas. Holy yum. Those turned out SOOO good. The filling would actually be great in a wrap for a quick lunch bite. The spice combination was just perfect. This is most definitely worth the effort to make again and again. It'd be so great for party appetizers as it can so easily be made in advance.

The Greek Wrap Pinwheels were next on the favorite list for me. But it's such a typical combination that it can't be called creative, just good.

Now, for the Mushroom Ceviche review. First off, I really do not like avocados...at all. But the original recipe called for them as did several others. I decided I'd try something new and go with it. I mostly picked the avocados out, I just don't like the texture. However, the overall flavor of this was really good. Very light and refreshing. I have never had a true ceviche, so I have no real comparison. However, Jason does like ceviche, and he really liked this recipe. I think it would definitely be great as a party appetizer as well.

So there you have it. I hope everyone is having a terrific weekend!