By Heather Iacobacci-Miller June 22, 2010
Running & Boxing
I was determined to get in a run this week. I have not run since vacation because it's just too hot to run past sun up right now. So, we got up and hit the pavement by 5:45. It was already a steamy 77 degrees humid. I say that  because 77 isn't bad, it's the humidity that's bad. Anyway, we just did 30 minutes at an easy pace. No records being broke, but that's what I wanted that early. I really just wanted to get moving again and to loosen up my legs (still sore from Sunday's workout). It felt great to be outside watching the sun come up too. During lunch I did Cathe's MMA Boxing. It's amazing how high your heart rate can get up there just punching.

Free Time = Craft & Cooking Time
Getting my workouts done early left me with free time after work. It's so nice to have that extra time after work. It makes me feel like I've had some sort of day that wasn't nothing but work. I started a new project last night, so I was able to finish that today along with laundry and other piddly chores. I used to do more crafty projects. Somehow I used to find the time for them, like making curtains or pillows. Where did that time go???? Oh, blogging and cooking perhaps? ;-)

Anyway, the project you ask (even if you don't ask, I'm telling). I have lots of hanging pots around our fence. I just take plain (cheap) terracotta pots, spray with a terracotta sealer inside and out, and paint them white. Then I plant bright flowers in them for a pop of color. I decided I wanted some to put on the corners of our raised garden beds. So, that project was finished up today. I know I could choose other colors, but there is just something about white with bright flowers that seems crisp to me. Now if you want some truly inspiring craft projects, check out Simple Daisy. I'm always in awe when I see her projects!

I also had time to make some more Chikn' Seitan (recipe here). 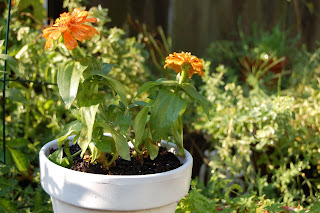 Dinner
Jason went to ride bikes with a friend after work, so I knew he wouldn't be home until later. I'll admit, the thought of having cereal for dinner certainly crossed my mind. He had mentioned stir fry but that didn't sound very appealing to me to be honest. Besides, I'll be able to make it later this week using my homemade Chikn' Seitan. He was talking about gazpacho a few days ago. I've actually never had it. Cold soups don't exactly sound appealing to me. However, it's hot, so I thought I'd give it a shot. If all else failed, I had cereal as a back up. I did some internet browsing for recipes and just piecemealed my own - well call it Heather's Gazpacho. I also decided to serve a Grilled Caprese Style Sandwich on the side.

Directions
In food processor or blender, puree 1/2 can of tomatoes, water, oil and garlic. Transfer to a medium bowl. Add remaining 1/2 can with fresh veggies and do quick pulse (not pureed). Add that to the bowl with pureed tomatoes along with the 2nd can of tomatoes, beans, sherry, and spices. Refrigerate at least 2 hours before serving.

For the Grilled Caprese Style Sandwiches, I used Soy Kaas Monterey Jack (yes should have been mozz for this I know), fresh basil, fresh spinach, and thinly diced tomatoes. 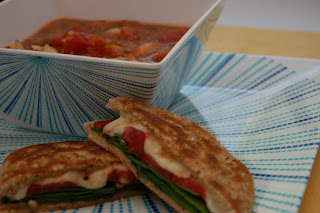 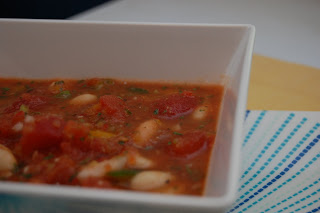 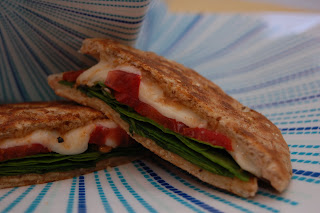