Running in the Rain & Grilling

By Heather Iacobacci-Miller June 29, 2010
Shopping in Spain
Well, last night I waited to check the voice message on our phone until after I had finished my workout. It was a message from the bank. Well, I thought it was because I had been lazy and not activated my new card (it arrived Saturday). So I went to activate and wasn't allowed to do so. I was annoyed because that meant I had to call back the person who had left the message and actually talk to someone rather than punch in numbers.

She started asking me about recent purchases...in Spain. Yep, card had been hacked somehow, and someone was having a great time buying 393 dollar perfumes and such. It's such a helpless feeling. They froze the account, but the bank was already closed for the day. That meant I had to wait...I'm not good at waiting. Luckily, the bank opens at 7:30 am, so we were there promptly at 7:30 am.

Running in the Rain
That story brings me to this morning's workouts. I was hell bent on running. I was determined to run with or without Jason. I headed out at 5:45 sans Jason. I had thought it was supposed to cool down overnight to 74. Um, it was 80 at 5:45??? Really??? I got going and felt a few rain drops. I was actually happy because I knew that would keep me cool.

The drops became more steady, but I kept going. The only annoyance was drops in my eyes - they hurt by the way. I needed goggles. Normally I run with sunglasses, but it was still dark out. The route I take is a bit over 1.5 miles. I was feeling good on the second lap, so I headed for a 3rd. The rain was steady by this point mind you. I kept on going, feeling strong (or stupid). Then the lightening and thunder started. Time to pack it up. I did manage right at or just over 4 miles at least.

Rather than go into work at 7 then turn around and leave for the bank 30 minutes later, I let my boss know I'd be in after the bank. So, I still had time left before I had to get ready for work and the bank. I did the last 3 combos of Cathe's Kick, Punch, and Crunch to round out an hour-long workout. I had two seriously good workouts and felt super energized.

I ended up getting to work right at 8 and was starved. I normally eat my oatmeal around 7:15. I got that going and was sorting through emails and such. Low and behold, I blew up my darn oatmeal. Not good, not good. I get super grumpy when I'm hungry. Thankfully, I keep a stash of lower-sugar oatmeal packets in my drawer, otherwise, someone may have gotten hurt. I doctored the oatmeal up with peanut butter (I keep a small container in the fridge), strawberries, and bananas. Sometimes instant saves the day.

Grilling Out
Jason bought some corn the other day to grill up. He probably got a little purchase happy with it, but I figured I could use it for a Black Bean & Corn Salsa for this weekend. I was really undecided on dinner. I knew I needed to grill the corn, but had no idea how I really wanted to use it with dinner. We also had some squash and zucchini that needed to be used. He suggested stuffing it in some way shape or form. I ended up doing grilled corn, Grilled Quinoa and Lentil Stuffed Squash/Zucchini with Gardein Chick'n Scallopini that I had picked up to try a few weeks back.


Directions:
Heat your grill (can use griddle or oven as well). Grill vegetables fleshy side down until just soft. Scrape out most of the flesh and transfer to mixing bowl.

In bowl, add quinoa, lentils, and spices and mix together.

Fill the zucchini/squash shells and top with Daiya Mozzarella (optional). Return to grill until "cheese" is melted.

I also grilled the Gardein Chick'n Scallopini per package directions, brushing with BBQ sauce. To grill the corn, I simply cut off the tips and soaked in water approximately 30 minutes before placing directly on grill for approximately 20 minutes (rotating). 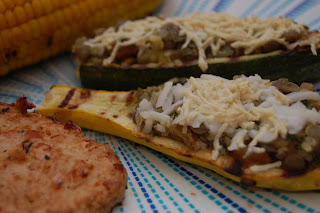 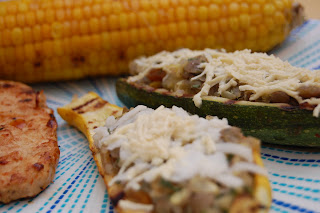 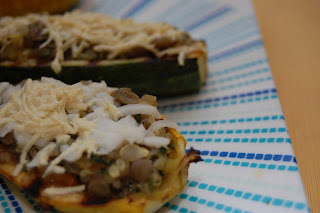 This meal turned out pretty fantastic if I must say so myself. I will definitely be playing around with more stuffed squash/zucchini recipes. Next time I think I will add either almonds or pinenuts as well. This was the first time we had tried this particular flavor of Gardein products. They were good, but I think I like the Quorn product better. Jason, however, really liked them. I'm sure we'll try them again, especially if on sale.