Triple Workout and Tofu on Thursday

By Heather Iacobacci-Miller July 22, 2010
Lifting, Boxing, Running
This morning I got up and got my workouts out of the way. It was a great way to start the day I must say. I did biceps and triceps as supersets - 3 sets of 8 reps except as noted.

After the weights, I did about 15-ish minutes of Cathe Friedrich's MMA Boxing while waiting for it to get light enough to safely run.

I didn't have time for the usual 3-mile route. I ran a little off route so I don't know exactly how far I went, but it was probably a bit over 2 miles. I know that the first lap put me around 1.75 miles at an 8:18 pace. I must say that I am pretty happy with that pace and how good I felt, but I know that I couldn't have maintained it for a longer run. I did keep going another few blocks trying to round out to at least 2 full miles before admitting I had to head home. It felt good and I wish I had been able to run longer actually. Love it when it all seems to fall into place nicely.

What to Eat?
After work I was planning to head over to our new local market that carries local produce. I'm really frustrated with our garden. About the only thing that I have an abundance of is jalapenos. Don't get me wrong, love jalapenos, but they don't exactly help me make up a meal. We had some animal that kept eating down the plants when they were first put in the ground, so everything is really behind. I have tomatoes, but not enough at one time to do much with other than a few to toss on a salad even.

Anyway, I say all that because we are fresh out of fresh veggies. I feel like we're out of almost everything all of the sudden actually, and I'm not sure how that happened exactly. Jason actually offered to go for me though so I could go home and try to finish painting the trim in the living room. We had some patchwork to do on one of the door frames.

I had him pick up zucchini (been really wanting zucchini pasta lately), squash, tomatoes, portobellos, asparagus. I figured I could get a few meals out of this produce. I don't know if the heat has sucked the creativity right out of me or what, but I have been feeling a bit like a slacker in the kitchen lately. I have all of these recipes that I had so wanted to try, now I just want something super fast and super simple.


I finally settled on Veggie & Tofu Sandwiches with baked sweet potato "fries." I was going to grill everything, but seeing as how it was 100 degrees (not including the heat index) I opted to bake it. I did use a grill pan for the squash and white (yes white) eggplant. The white eggplants are one of the things that are doing really well in our garden. This is the first year we've grown them, and we've been looking forward to trying them.

For the tofu marinade, I used a habanero and mango marinade I had on hand. I love the hot and spicy combo of this particular marinade and am sad that this was the last of it. I guess what it really boils down to is that I am going to have to make my own. 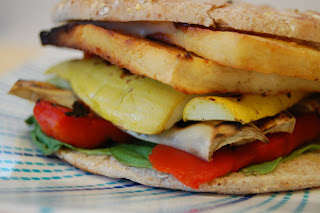 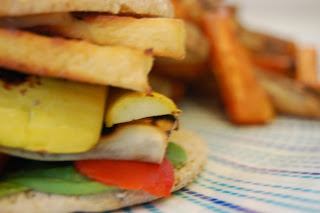 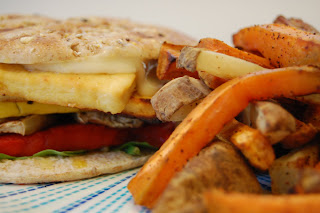 Oh, as for the white eggplant, it pretty much tasted like the Japanese eggplant as in it was milder than a regular eggplant.

Do you find that you go through lulls in the creativity department?