By Heather Iacobacci-Miller August 19, 2010
More Furbaby Talk
I guess I should talk about my furbabies more often and let you all in on my wild and crazy kids. I love that so many of you are major animal lovers and are also into the adoption/rescue route. It's something that I feel very strongly about actually. There are so many precious animals dumped off because they aren't 100% perfect and the breeder can't get full price or they come from puppy mills or are simply dumped when they become too much "trouble."

It's true, you don't always know what health problems might be lurking with rescues. Our girl Erin had kidney failure. Heath has an over bite, 3-toes on one foot, and urinary issues that require a special diet. Maddie, well, we think that she knocked her noggin' when she was dumped off at 4 months old in a drop bin. Yep, drop bin folks. But then there was my first girl, not a rescue, who ended up with juvenile cataracts. So you never know. You can pay top-dollar and still have no guarantees. Plus, I think rescues somehow appreciate you just a bit more.

Disclaimer - I do not judge you if you paid full price from a reputable breeder for your pet. If all breeders were truly reputable and truly cared about the pets they are breeding, then there would be fewer pets in need of rescue.

3rd Early Morning Workout
I feel like I'm on a roll with these early morning workouts. Though, I must admit that I was a little sluggish and could easily have reset the alarm and dozed right back off.

But I didn't. We got up at 5:12 am so we could get in a run. I did MMA Kickboxing as a warm up while Jason drank his coffee to wake up. Unfortunately, it's getting light enough to safely run later and later. I am so accident prone that I do not need to be running in the dark. Since we didn't head out until right at 6 am, I was only able to get in a little over 2 miles. I was disappointed actually because it was a good run and I could have kept going. I would have loved to have gotten in another 4 miles.

The humidity, however, is most definitely back in full force. It was 81 degrees with index of 85 when we headed out. It shouldn't be that warm when it's still dark out should it? We both ran through sprinklers like giddy children when we saw some.

Another Free Evening Means Grocery Shopping
I had a really busy day at work with several meetings fairly close together. So, I opted to just work through lunch and leave early. It's amazing how different leaving one hour early can feel. The Limited supposedly had all these fantastic markdowns so I thought I'd head over to the mall and check them out. Apparently I went to the wrong store. This one apparently missed out on the memo for markdowns. Total waste of time. I ended up hitting up the grocery store at least. But seriously, why does each Kroger stock different items? The one I went to does not sell the Le Tortilla Factory tortillas or the whole-wheat hamburger buns I like, nor does it (apparently) sell local produce like one of the other stores. Lesson learned, sometimes convenience is not worth it, because now I'll be making another trip. Humph.

Tonight easy was the name of the game for dinner. I just heated up the Red Bean & Lentil Burgers I made the other day and baked sweet potato "fries." Burgers were topped with spinach, roasted red bell peppers and the Follow Your Heart Vegan Gourmet "Cheese" that I'm trying to use up. 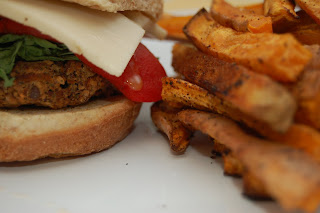 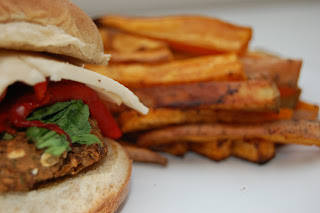 These "burgers" held together very well. Lately some of them have been a little soft. I'm not sure if it was the addition of red beans (they tend to be drier) or the sesame seeds, or both. Do you have a go-to veggie burger recipe or do you just sort of wing it each time? I wing it.