Another Early Workout and Grilling

By Heather Iacobacci-Miller August 18, 2010
The Furbabies
So, of course I must thank everyone for telling me how cute and adorable my furbabies are. Of course, I won't show them all the comments because they already have big enough egos ;-)

I don't talk about them often, but they are most definitely our children. They have completely different personalities too. Both were rescue dogs, and we adopted them from different breed specific rescue groups. We got Maddie in February of 2006 just after my first Cocker Spaniel passed away from a group in Dallas, TX. Maddie was approximately 4 months old and a total bundle of spastic energy. When we met her, she was playing alone tossing a ping pong ball. We should have know then and there we were in for something big.

After our second Cocker Spaniel (another rescue) passed away after many many months of suffering from kidney failure, we ended up adopting Heath from a group in Oklahoma. He was about 10 months old and the calmest, sweetest little boy you could ever ask for. All he wants is love, love, a lap, and more love.

Madeline rules the roost and is still a total spaz. She goes by many names such as Maddie, Madness the Badness, Maddie Mad Mad, and a few names I won't mention. Heath is Heath Man, Heathy Boy, Bubbers, Bubby Man.

So, that's just a bit of info on the pups. I could write a whole post on Maddie's antics that would have you all shaking your heads, laughing, and praying for me. As for Heath, his post would be all about chasing bubbles.

Another Early Workout
This morning Jason's alarm went off at 5:03 am for him to get up and get to swim. I had already planned on getting up to get my workouts done. Though I must admit I was finally sleeping soundly at that time.

This morning I did legs with hamstring/glute/calf focus. I opted for super sets doing 3 sets of 10 reps unless noted.

I followed up the weights with 3 combos and abs from Kick, Punch, and Crunch. I usually dread weights in the morning as I just don't feel quite awake and strong enough yet. However, this turned out to be a good workout for me.

Do you prefer weights early or later or does it seem to matter?

Dinner
Tonight I ended up using the Chikn' Seitan I made yesterday. I had made some in larger "steaks" or patties not really sure how they were going to turn out. I decided to use those as you might use chicken breasts for a Grilled BBQ Chikn' Seitan Patties with grilled squash, zucchini, and onions and smashed cauliflower. 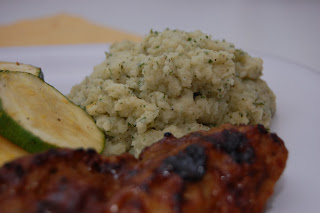 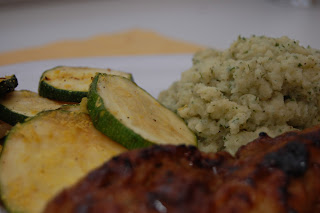 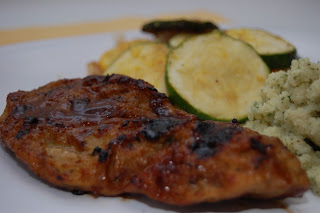 These turned out really well. I will definitely make larger patties out of the seitan again.