By Heather Iacobacci-Miller August 28, 2010
Anniversary Follow Up
From the bottom of my heart, I thank you all for you kind words from yesterday's post. Big cyber hug to you all!

I was really excited about eating out last night. We really don't go out to dinner often, and we rarely go all out and splurge on a high-end meal dolled up in our best duds. Last night (well, 6pm) we went all out. I knew what I was going to wear and was planning on wearing the pearls and pearl earrings I had worn on our wedding day, which Jason had actually bought for me. But to my surprise, Jason bought me diamond earrings and a diamond pendant necklace!!!! 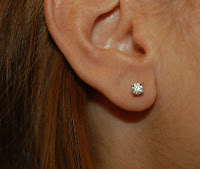 I cannot even describe how surprised I was and then the thought he put into it....amazing. He was planning on an anniversary ring - 3 diamonds for past, present, future. Plus, my engagement ring is very very simple. We had it made, and he has always thought I should have something more. But I am not a big bling bling ring girl at all. I love that it's simple, and I never have to take it off. It doesn't get in the way. So he thought the earrings (1 diamond for each ear equals 2) then the necklace (1 more diamond for 3 total) would signify the past, present, and future.

I felt like such a heel when I handed him his gift - silver cuff links with a black diamond in the center. He has never had any really nice cufflinks, so I thought these would be a great gift. Apparently I should have gotten diamond button covers too! But he loved the cuff links. 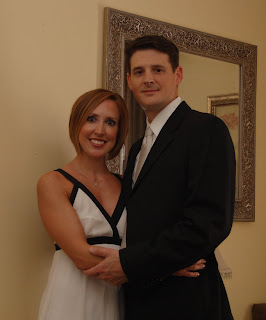 After taking some pictures of ourselves, the dogs aren't good at such things, we headed over to a restaurant we enjoy called Lulav. It's only a few blocks from our house too, gotta love convenience. They have these unbelievable fruit infused martinis. I am not typically a martini drinker at all, but you simply cannot pass up a strawberry pineapple infused martini friends. 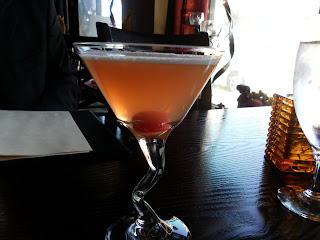 I started with the Verdures Farcides, which was a plate of mushroom caps stuffed with Spanish vegetables and fresh mozzarella. It was really really good, with a slight spicy kick from peperoncinis. I will admit to removing the mozzarella because it was just a bit thick. I never thought I'd ever be one to take the cheese off of something because there was too much. It sort of overpowered the mushrooms and veggies though. Jason had *gasp* the foie gras. He hasn't had anything like that since he worked at a French restaurant about 8 years ago. He had already started to dig in before I got a picture so excuse the mess and fork. He's still learning how to be the husband of a blogger apparently. 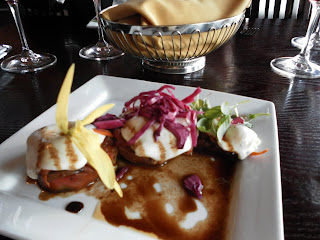 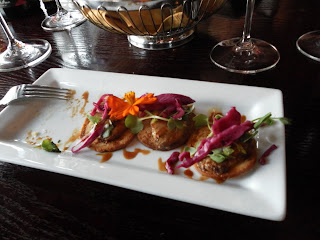 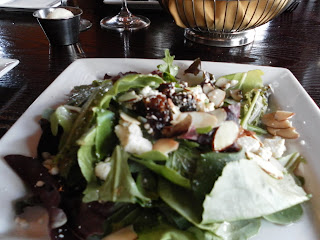 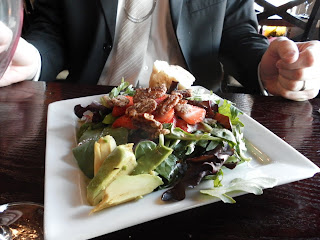 Dinner was roasted vegetables over angel hair pasta for me. Jason had veal chops with smashed potatoes and squash and zucchini as sides. 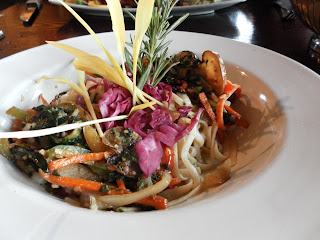 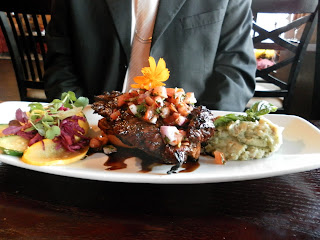 Oh, and we had an awesome wine: Anne Amie Cuvee A Pinot Noir. We had the sommelier come out and let us sample a few wines. The man knew his stuff (he better right?). We sampled in one glass and he made us keep some of the wine in that glass then poured in a different glass. Wow, it really is amazing the difference a glass can make in the taste of a wine. He then let us try the same wine in a 3rd, basic wine glass. If I had tasted the wine in that glass, I would not have drank it. Seriously made that much of a difference. 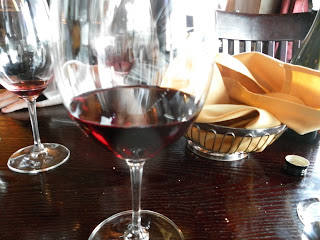 We skipped dessert. Nothing really just jumped out at me, probably a good thing. I had actually planned on doing white chocolate covered strawberries but didn't have time to make it by the store to pick up the strawberries. But, we decided to stop on the way home and pick some up. I will admit that we ate most of the strawberries and didn't wait for the chocolate to even dry! So, this is a picture of how they looked today after the chocolate set. 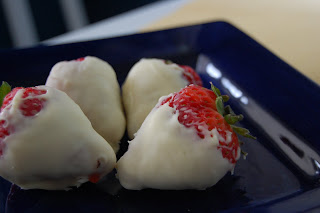 Redeeming Run
This morning I really thought I would sleep in. Didn't happen. I ended up getting up around 7:45. I wasn't sure what workout I was going to do. I typically have been doing chest and back on Saturdays, but I did that on Thursday. I decided to head out for a run around 9:20. It was about 75 degrees, but low humidity. There was a slight breeze too, so it really felt fairly nice. I wasn't sure how long I was going to run. I just thought I'd at least shoot for 3 miles.

I ended up taking slightly different routes with each lap (thanks Jessica) and ended up running for 50 minutes. It was a fantastic, redeeming run for me. My past few runs have been kind of crappy. I felt great today and just kept going and going. I did make a couple of dashes through some sprinklers though. 75 didn't seem warm when I started, but 30 minutes later, the temps had gone up (it was 81 when I finished) and my body temp was definitely going up. But, I did a lot of thinking on this run today and here's what I learned:
Enjoying the Day
I really need to hit the grocery store, but plan on enjoying the day by lounging on the patio with a new book. Errands may or may not get run, chores may or may not get done. Frankly, I don't care. I plan on enjoying the day for what it is - a gorgeous day, a day off, a day of relaxing, and another day to enjoy with my awesome, unbelievable husband.

Have a great day friends!