By Heather Iacobacci-Miller August 12, 2010
Thank You!
I wanted to thank everyone for their comments and suggestions in regards to updating my blog and new commenting tools. I am definitely going to be adding the following tabs:
About Me
Blogroll
Recipes
Workouts (though still not sure how I'll handle)

I hope this cleans up the site a bit. I also need to get a new About Me picture - any professional photographers want to help me out? ;-) I do apologize in advance for any disruption caused by changing to a new commenting tool. I'll be sure to give a heads up when this happens so you'll know to expect it. I'm hoping it won't be a total disaster.

Sweaty Mess
Before bed, Jason promised to get up to go run with me this morning. I set the alarm for 5:17 am so he would have plenty of time to wake up and get ready (he can be slow, sorry honey, but it's true). I can seriously jump out of bed, throw on my workout clothes, and put in my contacts within minutes and be ready to hit the pavement. Jason...not so much. While he was waking up, I decided to do Cathe Friedrich's MMA Kickboxing for a warm up rather than just stand around idly, and no I did not do the whole thing, I'm crazy but not that crazy. I just did combo and interval 1 (about 13 mins).

We set out for the run just before 6 am. It was already 80 degrees and the humidity and dew points were both in the upper 70 range (typically the closer they are, the soupier it is). Except for feeling like I was breathing water and should have been doing the breast stroke, the run was actually pretty good.

My legs were a little stiff at first from weights yesterday, but the extreme heat helped loosen them up (either that or I was hallucinating and could no longer feel them). We were soaked by the first mile - as in sweat dripping off elbows, fingers, wrists. Pretty ;-) We lucked upon a sprinkler system that was on probably around 1.5, but the water was warm. I was heartbroken.  When we made our second lap, the sprinklers had been turned off. Sadly (and seriously), the puddle in the driveway looked very very appealing. I could envision myself lying in the puddle for just a second.....ahhhhh.....

After the run, I decided to finish up with the 2nd combo only from MMA Kickboxing and then called it quits at a total of 58 minutes.

Baseball
Tonight we're going to a baseball game. We bought a special package of tickets that we must use before the season ends (which is rapidly approaching). So, heat or no heat, that's what we're doing tonight (and again tomorrow with several friends). I know we'll still have fun, and hopefully the temps will drop to a more comfortable or bearable degree as the sun goes down.

So, with that being said, there will not be a traditional dinner post. I am assuming we'll be throwing together something fast and easy before heading out. I know Jason will want the obligatory ballpark hot dog, so there's not need in me going all out and making a big dinner. Plus, it's a really good excuse to not do so. I'll either throw together some sort of wrap or perhaps another salad. If I do anything that seems more exciting, I'll be sure to post it ;-)

Here is what our weather looked like at 3 pm today. I know that I have several readers from the south so they had similar temps. What's the weather it like where you live? 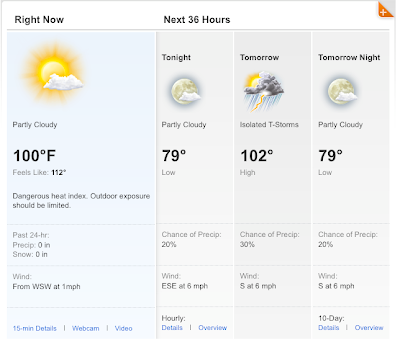