By Heather Iacobacci-Miller August 03, 2010
I had fully expected to be able to sleep in Monday morning. Unfortunately, we ended up with an east facing window so the sun was streaming in bright and early. I did stay in bed until after 9, but wasn't really sleeping, just sort of dozing in and out. Guess that's better than nothing of course.

I had fully planned on going down to the gym for a short cardio stint - Jason emphatically said no way. He forced me to rest - though we did spend the entire day walking around Philadelphia. Unfortunately there was no microwave in our room so I couldn't heat up oatmeal. We had to go out to eat. We found a fantastic vegetarian and vegan eatery called Basic 4 Vegetarian Snack Bar. I seriously could not make up my mind because I could eat every single thing on the menu. I was really dumbstruck. Jason wanted breakfast food (it was 11 am) so we shared several things: a tofu scramble topped with soy cheese with a side of a vegan sausage patty and potatoes, whole-wheat pancakes, and a vegetarian panini with vegan bacon, tofu scramble, spinach, and soy cheese. 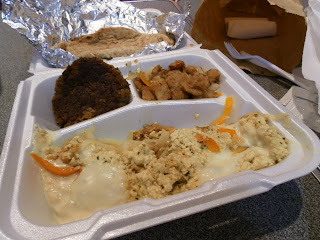 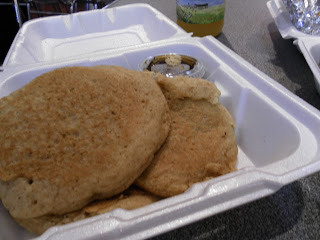 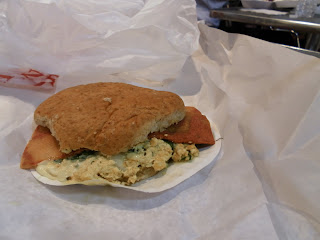 After stuffing our faces, we spent about 3 hours walking around the city. It was fun and tiring. Thankfully, the weather was pleasant and it wasn't too warm and no rain. We did stop back at the hotel to rest our feet for a bit before heading back out. We made a stop at Monk's Cafe for a drink and "appetizer." Jason was wanting to try a vegetarian Philly Cheese Steak and they had one made with seitan. So, we split that. We hadn't eaten since our super late breakfast/early brunch. The sandwich was really quite good. It's been fun trying so many vegetarian menu options. I'm very lucky that Jason is so open and willing to try them too. 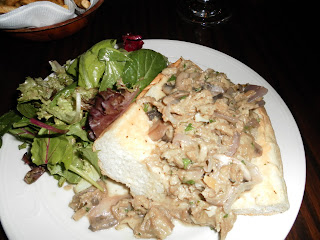 After that, we did a bit of shopping, more window shopping than anything. I did make my way into a Lululemon store. We don't have one anywhere near us, so this is the first time I have been into one. I behaved and only left with 2 headbands. Kind of a dorky purchase, but I was really excited. We made our way through some more residential areas, which was sort of fun. I am loving all of the old architecture (we're in the Center City area by the way).

For dinner we ended up at a pizza and wine restaurant called Zavino's. It was so good! We started off with a grilled zucchini "salad" and an eggplant and tomato "salad." We got their mushroom pizza with a red sauce instead of the bechamel (called the Kennett). One word: yum. 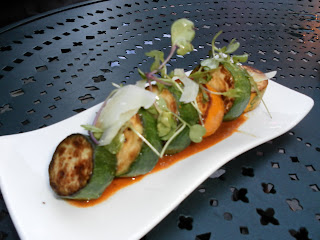 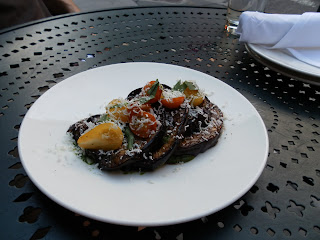 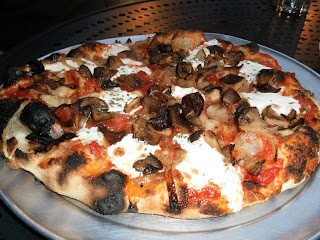 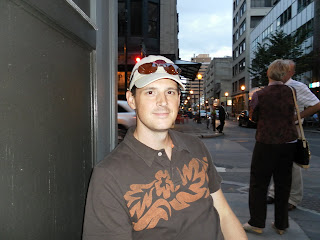 After dinner, we did indulge in some gelato. Neither of us had ever tried it before and there was a gelato place right across the street - it was fate. Oh wow, it was so good. I am not going to feel the least bit guilty either. I never ever get things like that, so this was truly a treat. In fact, this whole trip has been one huge treat that I will never forget.

What has been your best vacation or even just a quick getaway? Do you allow yourself to indulge? I rarely do and now I feel like maybe I've been missing out.