By Heather Iacobacci-Miller August 22, 2010
Fun Evening, Bad Blogger
Let me first say that I was a very very bad blogger and failed to remember to whip out the camera until there were only 2 lone pieces of sushi left...

So, that means we did indeed have sushi. We ended up having sushi rolls, wakame salad, sauteed spinach, and edamame at a local restaurant as an appetizer. Jason and Sarah split a couple of non-vegetarian rolls. I had (well not all by myself of course) 1 maki roll with Japanese eggplant and another with wakame. We figured this was safer than attempting to make sushi for the first time, having it fail, and be left starved and grumpy.

After we got back to the house, I started pizza dough for later in the evening. We did half with squash, zucchini, onion, and olives and the other half was a Margherita pizza with fresh basil (about the only thing growing my my garden), Roma tomatoes and some smoke mozzarella that Sarah had brought over.

While the dough was in the bread machine and I was catching up on a bit of blogging (thought blogland seems super slow this weekend) Jason took Sarah over to the Argenta Market at her request. She really wanted to pick up a few things there to take home with her, and Jason wanted to get some whole-grain bread they sell for breakfast. He promised to make Sarah an egg, tempeh bacon breakfast sandwich that apparently required this bread and this bread only. Men... 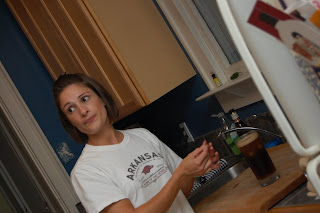 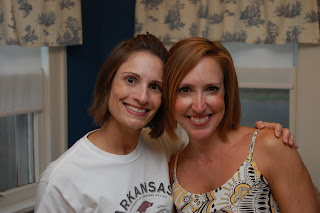 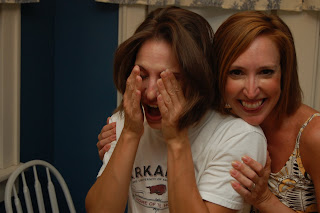 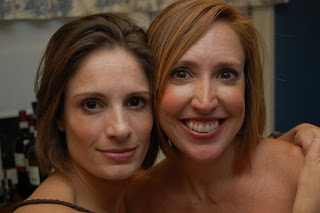 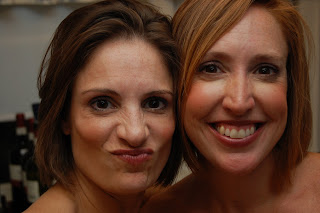 All in all, it was a great evening. I always enjoy spending time with my sister.

Another Summer Sunday
This morning I got up just before 8 am and headed out for a run. It was so hot and I probably should not have gone out. I was only able to mange 20 minutes before having to call it quits. It was just too miserable. I came in and made myself oatmeal with bananas, blueberries, and peanut butter (crunchy that I bought by mistake). Jason made the breakfast sandwiches for Sarah and himself. She ended up leaving a little after 10 am.

I headed up to get my leg workout done. I am still not seeing any results with my hamstrings, though my booty seems to be getting higher and firmer at least. I decided not to break out the legs into two workouts (front focus and rear focus). Today I did supersets for most of the exercises and most were done as 3 sets of 10 reps unless noted:

I finished with a long stretch then protein shake.

Post workout, I hit the pool and patio as has become fairly typical for my Summer Sundays. I know there are a million things that I should have been doing, but sometimes it's nice to reward yourself with a day of pure laziness. Well, I suppose working out counts as something so it's not completely lazy, but you get the point. We spend all week running, going, working so it's nice to finally just do nothing for a change. I think we all deserve that.

It seems super slow in the blog world. Maybe it's the back to school  hubbub? I do think I am going to take advantage of it though and get my post out early, pre-dinner. I have no idea what we'll end up having tonight. We haven't even starting the whole, "what sounds good?" game yet. So it might be a while ;-)