By Heather Iacobacci-Miller August 24, 2010
Eked Out Morning Workouts
This morning I had my alarm set for a little after 5. I slept fairly well, only waking up twice, but the second time (around 4) I started to rethink getting up for a morning workout. I knew that I could easily fall back asleep for another two hours if I let myself. I think that it's also getting harder to get up early since it's starting to stay dark so much longer. I probably should have slept in, but ended up dragging myself out of the bed for weights and cardio.

I did 3 supersets for shoulders and triceps (odd combination) for 3 sets of 8 reps then finished off with 2 exercises done to failure (just for funzies).

I was feeling a bit weak again today. Of course, lifting in the morning always seems harder for me. I did end up having to drop down 1# for the last set of lying triceps extensions, but it's better to drop the weight than lose the form like I was doing.

After weights, I opted for Cathe Friedrich's MMA Boxing. It was a great way to finish shoulders that's for certain. I was thinking about a run as the temps were only 70 degrees this morning. But, I really didn't feel like a run at all. I was doing good to get the weights done this morning, so I wanted a lower intensity cardio or it wasn't going to happen at all. I do feel just a bit guilty for not taking advantage of this sudden cool down with a run, but the thought of getting out there and running that same route sounded more like torture this morning. Guess my mojo is still on break, but I'm trying to remain positive.

Relaxing Lunch
I will say that I was glad to have the workouts done. I got to actually just sit on the couch and relax during lunch today. We watched Samantha Brown on the Travel Channel. I think she can make almost any location seem appealing. I say almost because I'm still not completely sold on Uruguay, but I did learn some interesting facts at least.

The temps were only about 90 degrees when we went home. Sure made it that much harder to get back to work. It was almost like the first warm day of the year feeling when you're itching for it to be warm enough to shed the sweater and just park it outside. We're supposed to have low temps the rest of the week actually. Perhaps a noon run might actually be able to happen?

Pasta Night
Jason has been wanting me to make my "Creamy" Lemon sauce for a pasta dish recently, so I finally decided to make it tonight making the Creamy Spinach & Asparagus Pasta version. Basically, the lemon sauce is just the base and whatever veggies you add is your call. I think that both spinach and asparagus go really well with the lemon flavor. I also added in some of my homemade Chikn' Seitan as well. 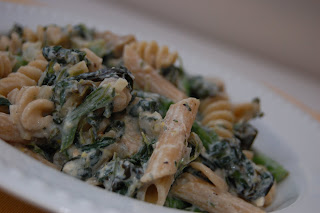 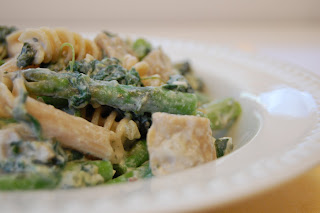 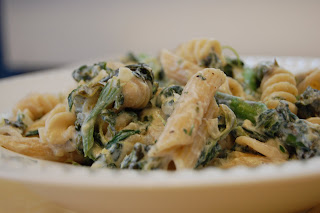 This is a nice protein packed, veggie laden, vegan dish.