By Heather Iacobacci-Miller September 26, 2010
First Chili of the Season
Yesterday Jason had his heart set on chili for dinner. Even though it was still around 80 degrees by 6:30, I did indeed make chili. It was the first chili of the season, and it was sooooo good. I have really missed chili over the hot summer. Jason picked up some locally made dried chipotle peppers - um, hot hot hot, but oh so good. I decided to make a Chipotle Chili. Rather than using chipotle in adobe like I have previously, I used the dried chipotles. 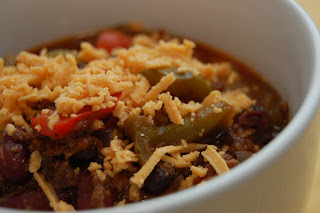 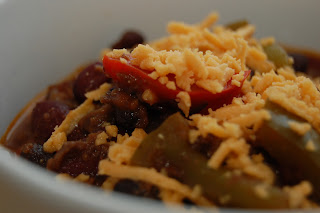 This is definitely not for those who can't take the heat. We topped it with Daiya Vegan Cheddar. Another option would be sour cream or Greek yogurt.

Leg Day
This morning I took my time getting around to my workouts. It's so rare that I allow myself to just sit and relax. I typically hit the ground running (almost literally). After my typical oatmeal breakfast, I sat and watched a bit of Food Network. It's been ages since I have sat and watched it. I've gotten rather annoyed with all the challenges. Anyway, after easing into the day, I got to my workouts. Leg Day. I had such an awesome workout last Sunday, that I repeated it with just a couple of minor changes.

I followed it up with 3 combos and the abs workout from Cathe's Kick, Punch, and Crunch. That ab workout is no joke.

Just Enjoying the Day (and Pizza)
The sun was in and out today. For a bit, it was more out than not. I took advantage and sat on the patio with my recent book. I kept the laundry rotating while I was outside, so I was still being productive and lazy. Love it when I can multi-task like that ;-) Jason did a ton of much overdue yard work. I felt a little guilty not helping out like I should have. There is plenty to be done in the flower beds. I did help weed one of the smaller beds. But it wasn't enough to really say that I helped.

The past 2 Sundays we ended up going to Vino's for pizza and to get out of the house. Today I decided to make pizza for a late lunch (and to make up for missing Pizza Friday) to enjoy outside. It's almost hard to grasp, but the temps were below 75 degrees. Anyway, it was a very pleasant way to enjoy lunch: at home, on our patio, and with a healthier pizza option. 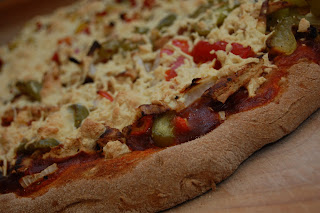 Notice all the gooey, melty Daiya Vegan Mozzarella.Yum yum yum. Since we did have such a late, heavy lunch, dinner will likely be a salad of some sort or maybe soup with these dropping temps.