By Heather Iacobacci-Miller September 16, 2010
Made it Home
Well, we made it back safe and sound last night. It was a pretty good trip home actually. We talked pretty much the entire time, so that made time go by fairly quickly (or for me anyway). It was definitely nice to sleep in my own bed and shower in my own shower. It's amazing how much little things like that matter and you can miss them when away.

Home Workout
This morning my boss let us go in a little later, so I got up and got in my workouts around 7 am. In other words, I actually got to sleep in an extra 45 minutes AND get in my workouts before work. It was so nice to work out at home.

I followed up the workout with Cathe's Low Impact Circuit and abs. It was a nice change of pace doing the step workout as opposed to running or one of the kickboxing/boxing DVDs. It was only about 72 degrees this morning, so I definitely contemplated a run, but I think my shoes are fairly shot and they're starting to hurt my calves and feet (and my calves never hurt from running). Definitely have to make it to the running store this weekend for some new kicks.

Back in My Kitchen
After work, I had time to make some Chikn' Seitan. I made some in larger patties again to either grill or to use with a gravy recipe that my friend Sarena @ The Non-Dairy Queen sent me. The rest of it, I cut into much thinner strips, that seemed to work out really well. Dinner tonight was just some veggie burgers I had made and stashed in the freezer with sweet potato "fries." I topped with a vegan "cheese," spinach, and red bell peppers. 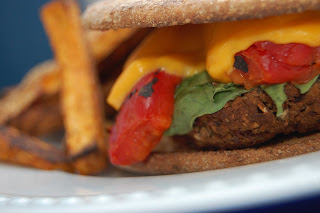 I must share a really great story with you all; it includes pictures too (finally). It's a "You know you're the husband of a blogger" tale. While I was in Dallas for training, Jason was of course left to fend for himself. However, having worked in an upscale French restaurant, he's not inept at all in the kitchen. However, the first night he did indulge in a gluten- and dairy-free vegan Mac N' Cheese he picked up (and spruced up with veggies and such). But he actually pulled out a cookbook (The 30-Minute Vegan

) and made a healthier Ramen Noodle recipe. He used the recipe in the book as a start and then added in extras. Even better, he took a picture! How awesome is that???? 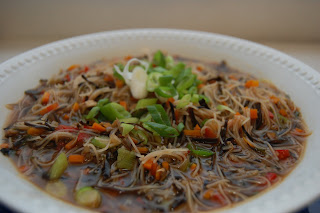 Commenting
I've gotten a few emails or direct messages on Twitter from friends saying that they are unable to comment. Please let me know if you're still having issues with commenting as well. I am not sure if it's a Blogger issue or Intense Debate (or both). I hope to find some time over the weekend (Sunday maybe) to try to get it fixed. Technology can be so frustrating can't it? But I'm working on it I promise (just slowly LOL). I know you guys understand and I appreciate that!